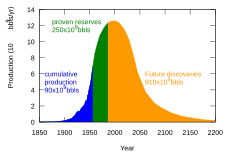 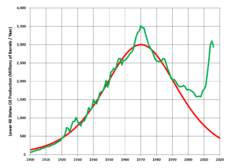 Peak oil is the idea that at some point an oil well, an oil field, a country, or the world, will be producing the most crude oil it can ever produce at one time. After this point, less oil will be produced and therefore people will have to use less oil because it will cost more money. Many scientists and governments are concerned about what will happen when there is less oil to go around.

It is unclear as to when the world's peak oil will happen, though many scientists agree that it was reached in the early 2000s or before 2020. For example, in 2010 the International Energy Agency (IEA) has said that peak oil may have happened in 2006.

All content from Kiddle encyclopedia articles (including the article images and facts) can be freely used under Attribution-ShareAlike license, unless stated otherwise. Cite this article:
Peak oil Facts for Kids. Kiddle Encyclopedia.