Ernest Jeffrey Moniz, GCIH (/moʊniːz/; born December 22, 1944) is an American nuclear physicist and former government official. From May 2013 to January 2017, he served as the 13th United States secretary of Energy in the Obama Administration. Prior to this, Moniz served as associate director for science in the Office of Science and Technology Policy in the Executive Office of the President of the United States from 1995 to 1997 and undersecretary of energy from 1997 to 2001 during the Clinton Administration. He is currently the co-chair and CEO of the Nuclear Threat Initiative (NTI), as well as president and CEO of the Energy Futures Initiative (EFI), a nonprofit organization working on climate and energy technology issues, which he co-founded in 2017.

Moniz, who is one of the founding members of The Cyprus Institute, has served at Massachusetts Institute of Technology (MIT) as the Cecil and Ida Green professor of physics and engineering systems, director of the Energy Initiative and director of the Laboratory for Energy and the Environment. Before his appointment as secretary of energy, he served in a variety of advisory capacities, including at BP, General Electric and the King Abdullah Petroleum Studies and Research Center in Riyadh, Saudi Arabia.

After graduating from Stanford, Moniz joined the faculty of the Massachusetts Institute of Technology (MIT) in 1973, serving as head of the department of physics from 1991 to 1995 and as director of the Bates Linear Accelerator Center. He co-chairs the MIT research council. He served in the Clinton administration as associate director for science in the Office of Science and Technology Policy in the Executive Office of the President from 1995 to 1997.

Moniz worked in the United States Department of Energy, serving as undersecretary of energy from 1997 to 2001. Moniz was one of the founding members of The Cyprus Institute in 2005, where he and other scholars undertook the coordination, research and planning of the project. In 2013, he received the honorary degree Doctor Honoris Causa from the Universidad Pontificia Comillas de Madrid in recognition of his research on energy policies and technologies. 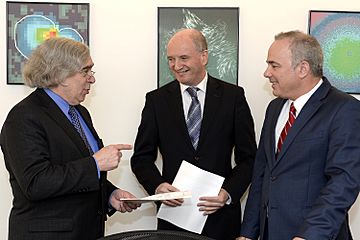 Moniz on visit to Israel with Daniel Zajfman (center), president of the Weizmann Institute 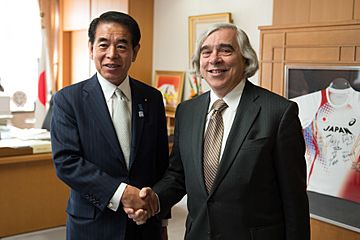 Moniz played a crucial role in negotiations toward a comprehensive agreement on the Iranian nuclear program, directly negotiating technical details with the Iranian atomic energy minister Ali Akbar Salehi, an MIT graduate, and reassuring President Obama that concessions important to the Iranians would not pose a major threat. The comprehensive agreement between Iran and the so-called "P5+1" (which includes the 5 permanent members of the UN Security Council, plus Germany and a representative from the European Union) was finalized on July 14, 2015, to much fanfare and criticism.

In June 2017, Moniz became co-chairman and chief executive officer of the Nuclear Threat Initiative, a nonpartisan, nonprofit organization working to prevent catastrophic attacks with weapons of mass destruction and disruption—nuclear, biological, radiological and cyber. He also founded a nonprofit organization called the Energy Futures Initiative, where he has promoted the concept of a "Green Real Deal" as a "practical, science-based" solution to climate change. The concept attracted praise in the media from The New York Times columnist Thomas Friedman and criticism from Greenpeace USA.

In 2018, Moniz was hired by the government of Saudi Arabia to serve as member of the global advisory board of the Neom project, a $500 billion planned megacity in the Tabuk Region.

In November 2020, Moniz was named a candidate for energy secretary in the Biden Administration. However, former governor of Michigan Jennifer Granholm was chosen instead.

Moniz has been criticized by environmentalists for his ties to the oil and gas industries. During his career, Moniz has served on the advisory boards for BP, one of the largest oil and gas companies, and General Electric. Prior to his appointment as energy secretary, Moniz served as a trustee of the King Abdullah Petroleum Studies and Research Center in Saudi Arabia.

All content from Kiddle encyclopedia articles (including the article images and facts) can be freely used under Attribution-ShareAlike license, unless stated otherwise. Cite this article:
Ernest Moniz Facts for Kids. Kiddle Encyclopedia.