Christoval is a census-designated place (CDP) in Tom Green County, Texas, United States. Its population was 504 at the 2010 census. It is part of the San Angelo, Texas, metropolitan statistical area.

The South Concho River runs through Christoval, and serves as a water supply to the surrounding area. It was the location of a resort from the 1930s to the early 1960s, near where U.S. 277 crosses the river.

The community, which has also been known as South Concho and Delong, is said to be named after early settler Christopher Columbus Doty. A post office was established in 1889 and a local school was operating by 1901. By 1914, Christoval had an estimated population of 200, two general stores, and a newspaper – the Christoval Observer. Through the 1930s, a Baptist encampment was held annually that attracted as many as 10,000 persons to the South Concho River area, and the mineral waters in nearby Christoval also attracted visitors and settlers.

On September 17, 1936, a devastating flood hit the South Concho River. The flood destroyed the Baptist encampment facility, and parts of Christoval. Several people were killed in the flood, as they were swept away by the rapidly rising water. Following the flood, the encampment facilities were never rebuilt, and the property eventually became a public park.

Playland Park was a popular local attraction from the 1950s through the 1980s. The park offered public access to the river, as well as boat rentals, a rope bridge, tree swings, and a concession stand. At its peak in the 1970s, the facility had amusement park rides and a small train. The facility was closed in the 1980s due to liability concerns and smaller crowds. Today, Pugh River Park and the historic, low-water river crossing on Loop 110 offer public access to the South Concho River.

Christoval is the hometown of Jack Pardee, a former American football linebacker and the only head coach to lead teams in college football, the NFL, the United States Football League, and the Canadian Football League. Mr. Pardee was inducted into the College Football Hall of Fame as a player in 1986. He was an All-American linebacker at Texas A&M University and a two-time All-Pro with the Los Angeles Rams (1963) and the Washington Redskins (1971)

Christoval is also hometown to realty TV personality Colby Donaldson who appeared in multiple seasons of the CBS show Survivor. 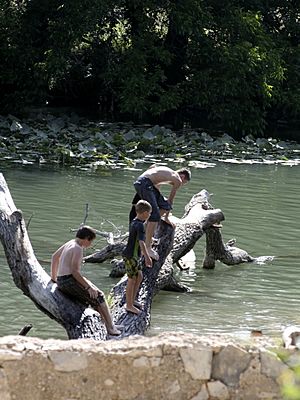 The South Concho River runs through Christoval, and around 0.75 miles of riverfront are part of a public park. The shoreline in this area is covered by large oak trees, and the trees have rope swings for visitors. This park, known as Pugh River Park, has visitors from across West Texas each weekend. Crowds of over 500 people are not uncommon on the weekends in the summer.

Public access to the South Concho River is also available at the Mineral Wells crossing, about a mile north of Christoval.

Each Memorial Day weekend, the community of Christoval holds Old Toenail Trail days, which attracts visitors from around the region. Festivities include live music, parades, and food and craft vendors.

The Christoval Winery, opened in 2010, serves as a gathering place for local meetings, as well as a hosts a chapel caters weddings and huge parties on the scenic land along the South Concho River. The Wine Tasting Room is open to the general public.

Adams Arena is located off U.S. 277 just south of Loop 110. Guests can enjoy horseback riding along the river, practice barrel and pole racing, or rent stalls for their horses.

Public education in the community of Christoval is provided by the Christoval Independent School District.

All content from Kiddle encyclopedia articles (including the article images and facts) can be freely used under Attribution-ShareAlike license, unless stated otherwise. Cite this article:
Christoval, Texas Facts for Kids. Kiddle Encyclopedia.