San Angelo /sæn ˈændʒəloʊ/ is a city in and the county seat of Tom Green County, Texas, United States. Its location is in the Concho Valley, a region of West Texas between the Permian Basin to the northwest, Chihuahuan Desert to the southwest, Osage Plains to the northeast, and Central Texas to the southeast. According to a 2014 Census estimate, San Angelo has a total population of 100,450. The city is the principal city and center of the San Angelo metropolitan area, which has a population of 118,182.

Common nicknames of the city include Angelo, the River City, the Concho City, the Pearl of the Conchos, and the Oasis of West Texas.

Prior to the arrival of Europeans, San Angelo was the center of the Jumano people. As of 1600, the area had been inhabited for over a thousand years by succeeding cultures of indigenous peoples.

In 1632, a short-lived mission of Franciscans under Spanish auspices was founded in the area to serve the Indians. The mission was led by the friars Juan de Salas and Juan de Ortega, with Ortega remaining for six months. The area was visited by the Castillo-Martin expedition of 1650 and the Diego de Guadalajara expedition of 1654.

During the colonization of the region, San Angelo was at the western edge of the region called Texas, successively claimed in the 1800s by the nations of Spain, Mexico, the Republic of Texas, and finally the United States, in 1846.

The current city of San Angelo was founded in 1867, when the United States built Fort Concho, one of a series of new forts designed to protect the frontier. The fort was home to cavalry, infantry, and the famous Black Cavalry, also known as Buffalo Soldiers by Indigenous Americans.

The settler Bartholomew J. DeWitt founded the village of Santa Angela outside the fort at the junction of the North and South Concho Rivers. He named the village after his wife, Carolina Angela. The name was eventually changed to San Angela. The name would change again to San Angelo in 1883 on the insistence of the United States Postal Service, as San Angela was grammatically incorrect in Spanish. The town became a trade center for farmers and settlers in the area, as well as a fairly lawless cow town filled with saloons and gambling houses.

After being designated as the county seat, the town grew quickly in the 1880s, aided by being on the route of newly constructed railroads. It became a central transportation hub for the region. The Santa Fe Railroad arrived in 1888 and the Kansas City, Mexico and Orient Railway in 1909. After a tuberculosis (TB) outbreak hit the United States in the early 1900s, many patients moved to San Angelo. At the time, doctors could only recommend rest in dry, warm climates. TB sufferers went to San Angelo for treatment.

In 1928, the city founded San Angelo College, one of the region's first institutes of higher education. The city had been passed over by the Texas State Legislature to be the home of what would become Texas Tech University. San Angelo College, one of the first municipal colleges, has grown to become Angelo State University. The military returned to San Angelo during World War II with the founding of Goodfellow Air Force Base, which was assigned to train pilots at the time. San Angelo grew exponentially during the oil boom of the 1900s, when vast amounts of oil were found in the area, and the city became a regional hub of the oil and gas industry.

The San Angelo Independent School District became one of the first in Texas to integrate, doing so voluntarily in 1955. 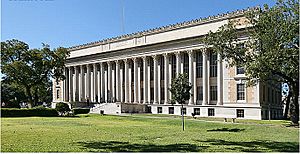 San Angelo falls on the southwestern edge of the Edwards Plateau and the northeastern edge of the Chihuahuan Desert at the junction of the North and South Concho Rivers. The city has three lakes: Twin Buttes Reservoir, O.C. Fisher Reservoir, and Lake Nasworthy. The Middle Concho River joined the South Concho several miles upstream, but the confluence has been obscured by the Twin Buttes dam.

San Angelo falls near the boundary between the subtropical semiarid steppe (Köppen BSh) and mid-latitude steppe climates (Köppen BSk). It is located at the region where Central Texas meets West Texas weather. Temperatures reach 100 °F about 18 times in an average year. However, in 2011, San Angelo recorded 100 days of 100 °F or higher. The average year has 50 days with lows below freezing. Though the region does experience snow and sleet, they occur only a few times a year. San Angelo averages 251 days of sunshine a year, and the average temperature is 65.4 °F. The city has an average rainfall of 21.25 inches (540 mm). 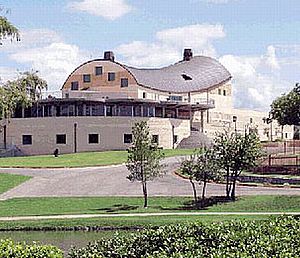 The San Angelo Museum of Fine Arts opened in 1999 in downtown San Angelo on the banks of the Concho River, built with local limestone and end-grain Texas mesquite. It attracts over 85,000 visitors a year and is home to the National Ceramic Competition. 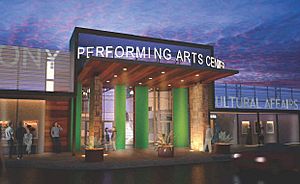 The San Angelo Symphony, founded in 1949, plays several events a year, with its feature event being on July 3. Over 20,000 people regularly attend that performance, which takes place at the River Stage, an outdoor venue on the Concho River.

Angelo Civic Theater, the oldest civic theater in Texas, was founded in 1885 to raise funds for a town clock at the county courthouse. In 1969‚ a fire destroyed the school building in which the theater was housed, so it produced its plays at various locations for 13 years, until it purchased the 230-seat Parkway Theater in 1980. Each year, the theater presents five in-house plays, as well as one traveling summer play, to 15,000 people. 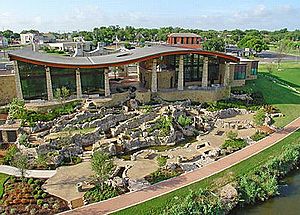 Ballet San Angelo was founded in 1983. The feature production is the annual "The Nutcracker" production.

Angelo State University, through "The Arts at ASU", puts on six plays a year open to the general public. The plays range from dinner theaters and theater in the round to conventional theatre productions, using the only active modular theatre in the United States. It also features numerous concerts and recitals throughout the year, and numerous displays in the Angelo State University Art Gallery. The public is encouraged to attend and actively supports all events. 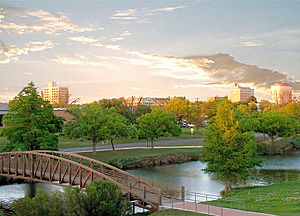 Pedestrian bridge at a park running along the Concho River

The San Angelo City Park system was created in 1903. The city currently has 32 parks with over 375 acres (1.52 km2) of developed land. The department maintains a 33-acre municipal golf course along the river, 25 playgrounds, and 25 sports practice fields.

The "crown jewels" of the parks system are the parks that make up the 10 miles (16 km) of river frontage on the Concho River winding through downtown and beyond. The parks feature many plazas, public art displays, and numerous water features. The city is home to the International Water Lily Collection. The park contains over 300 varieties of water lilies, one of the largest collections in the world. The city also provides several municipal parks on Lake Nasworthy, one of three lakes near the city, which include Twin Buttes Reservoir and O.C. Fisher Reservoir.

San Angelo is home to San Angelo State Park. The 7,677-acre (3,107 ha) park, owned and maintained by the Texas Parks and Wildlife Department, is located on the shores of the O.C. Fisher Reservoir. Many activities are available within the park, including camping, picnicking, and swimming, as well as hiking, mountain biking, orienteering, and horseback riding on over 50 miles (80 km) of developed trails. The park is home to the Official State of Texas Longhorn herd.

The San Angelo Nature Center, located at Lake Nasworthy, is an educational center open to the public. The center features many native and exotic animals, including alligators, bobcats, prairie dogs, tortoises, and 85 different species of reptiles, including 22 different species of rattlesnakes. It includes the Spring Creek Wetland, which has 260 acres (110 ha) being developed by the Federal Bureau of Reclamation, including a 7-mile (11 km) trail; its terrain varies from a semiarid environment to a freshwater marsh. It also maintains the one-mile (1.6-km) nature trail off Spillway Road.

Historic Fort Concho, a National Historic Landmark, maintained by the city of San Angelo, was founded in 1867 by the United States Army to protect settlers and maintain vital trade routes. It frequently experienced skirmishes with the then hostile Comanche tribe. Today, the restored site is home to several museums, and is open to visitors Tuesday through Sunday. Fort Concho is one of nine forts along the Texas Forts Trail. 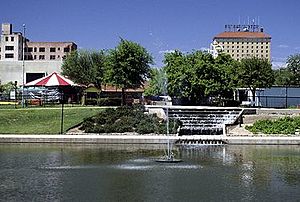 Fountains on the Concho River

The annual San Angelo Stock Show and Rodeo is held every year. The 2017 Rodeo is scheduled for February 3 through February 19. It began in 1932, making it one of the longest-running rodeos in the world. It is nationally renowned within the rodeo circuit, bringing in the top contestants and ranking as one of top 10 rodeos in the nation for monetary prizes awarded to contestants. It includes a parade, carnival, and concerts, and many other events in addition to the main stock show and rodeo.

All content from Kiddle encyclopedia articles (including the article images and facts) can be freely used under Attribution-ShareAlike license, unless stated otherwise. Cite this article:
San Angelo, Texas Facts for Kids. Kiddle Encyclopedia.