Kids Encyclopedia Facts
Not to be confused with Pecos County, Texas.

Pecos ( PAY-kəs) is the largest city in and the county seat of Reeves County, Texas, United States. It is situated in the river valley on the west bank of the Pecos River at the eastern edge of the Chihuahuan Desert and the Trans-Pecos region of west Texas and near the southern border of New Mexico. The population was 8,780 at the 2010 census. The city on January 24, 2012, had just appeared on Forbes 400 as the 2nd fastest-growing small town in the country. The city is a regional commercial center for ranching, oil and gas production and agriculture. The city is most recognized for its association with the local cultivation of cantaloupes. 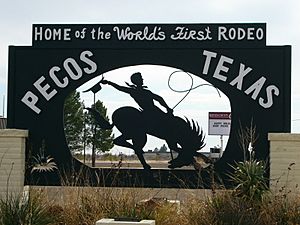 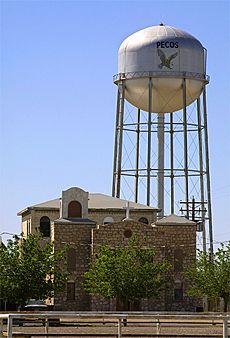 Water tower and an old church in Pecos, Texas

Pecos is one of the numerous towns in West Texas organized around a train depot during the construction of the Texas and Pacific Railway. These towns were subsequently linked by the construction of U.S. Highway 80 and Interstate 20. Prior to the arrival of the railroad, a permanent camp existed nearby where cattle drives crossed the Pecos River. With the introduction of irrigation from underground aquifers, the city became a center of commerce for extensive local agricultural production of cotton, onions and cantaloupes. The introduction of large-scale sulfur mining in adjacent Culberson County during the 1960s led to significant economic and population growth. The growth was reversed after mining operations ceased in the 1990s.

In 1962 Pecos resident and tycoon Billie Sol Estes was indicted for fraud by a federal grand jury. Estes extensive machinations caused a national level scandal, and a resultant shakeup at the Department of Agriculture. Oscar Griffin, Jr. of the Pecos Independent and Enterprise newspaper won a Pulitzer Prize for breaking the story.

Pecos is the site of the largest private prison in the world, the Reeves County Detention Complex, operated by the GEO Group.

According to the United States Census Bureau, the city has a total area of 7.3 square miles (19 km2), all of it land.

There were 3,168 households out of which 39.9% had children under the age of 18 living with them, 59.0% were married couples living together, 14.9% had a female householder with no husband present, and 22.5% were non-families. 20.4% of all households were made up of individuals and 9.6% had someone living alone who was 65 years of age or older. The average household size was 2.97 and the average family size was 3.47.

All content from Kiddle encyclopedia articles (including the article images and facts) can be freely used under Attribution-ShareAlike license, unless stated otherwise. Cite this article:
Pecos, Texas Facts for Kids. Kiddle Encyclopedia.