Coral snakes have notable red, yellow/white, and black colored banding. Most species of coral snake are small in size. North American species average around 3 feet (91 cm) in length, but specimens of up to 5 feet (150 cm) or slightly larger have been reported. Aquatic species have flattened tails acting as a fin, aiding in swimming. 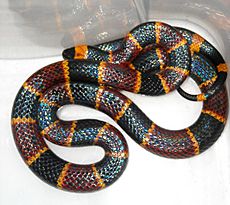 Coral snakes often hold on to a victim when biting, unlike vipers. Vipers have retractable fangs and tend to prefer to strike and let go immediately. Coral snakes are not aggressive or prone to biting. They account for less than one percent of the number of snake bites each year in the United States.

Coral snakes in the U.S.A. 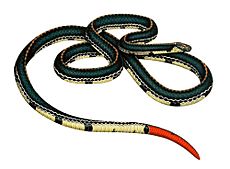 Colours of the Old World coral snakes can be quite a bit different from the American species. This is the blue Malaysian coral snake, Calliophis bivirgatus

New World coral snakes live in the southern range of many temperate U.S. states. They are found in the southern coastal plain from North Carolina to Louisiana, including all of Florida.

There is debate about whether the Texas coral snake is a separate species. Its habitat, in Texas, Louisiana, and Arkansas, is separated from the eastern habitat by the Mississippi River. The coral snake population is most dense in the southeast United States, but coral snakes have been spotted as far north as Kentucky.

The Arizona coral snake, which is a separate genus, is found in central and southern Arizona, extreme southwestern New Mexico and southward to Sinaloa in western Mexico. It lives in dry regions in thornscrub, desert-scrub, woodland, grassland and farmland. It is found in the plains and lower mountain slopes from sea level to 5800 feet (1768 m); often in rocky areas.

All content from Kiddle encyclopedia articles (including the article images and facts) can be freely used under Attribution-ShareAlike license, unless stated otherwise. Cite this article:
Coral snake Facts for Kids. Kiddle Encyclopedia.