Located in the heart of Virginia's famous Piedmont Hunt Country, Delaplane was originally known as Piedmont Station because it formed around a station of the Manassas Gap Railroad (chartered 1850 to connect the Alexandria and Orange Railroad with the Shenandoah Valley through Manassas, Virginia). In 1874 it was renamed in honor of W. E. Delaplane, a prominent Ohio businessman who generously restored operations at the local general store which had faltered in the after the American Civil War.

In 1861 General Stonewall Jackson had marched his troops from Winchester to the Piedmont Station train depot, where they loaded onto rail cars headed for the First Battle of Manassas. This marked the first time a railroad had been used to move troops into battle. Union troops also used the same railroad line in later battles.

Delaplane has also encompassed some of North America's oldest fox hunting territory, and from 1932 to 1945 Delaplane's Cobbler Mountain range hosted many of General George S. Patton's fabled escapades with his Cobbler Fox Hounds club. Patton was Master of fox hounds until his military transfer to Hawaii in 1935, and the club was disbanded ten years later upon receiving news of his untimely death in Heidelberg, Germany. Today Piedmont Fox Hounds based in The Plains, the oldest fox hunting club in the United States, still hunts Delaplane's rustic, stone wall lined terrain; as do Orange County Hunt based in Middleburg and Old Dominion Hounds.

In 1975 local resident and philanthropist Paul Mellon donated a 1,132-acre tract of land in Delaplane to the Commonwealth of Virginia creating Sky Meadows State Park which hosts the Delaplane Strawberry Festival sponsored by historic Emmanuel Episcopal Church every Memorial Day. The tract's previous owner, the late Sir Robert Hadow, was a Consul General from Great Britain and originally named the parcel Skye Farm after the island in Scotland which the area reminded him of. In 1991, Paul Mellon presented an additional 462-acre adjoining tract as a gift to the park. This tract, renamed the Lost Mountain Bridle Trail Area, was originally surveyed by George Washington and purchased by Washington from his client Lord Fairfax. More recently, in his memoirs Virginia Senator John Warner fondly recalls childhood summers spent working at Hill Crest Farm in Delaplane, while on break from St. Albans School in nearby Washington, D.C. 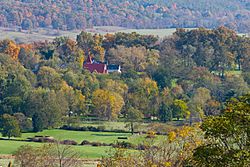 Village of Paris, northwest of Delaplane

The village of Delaplane remains home to Emmanuel Episcopal Church, an antique shop, and a working post office. Nearby towns of Upperville, Middleburg, and Marshall also provide services to Delaplane's widely spaced residents.

Although Delaplane's farms are historically associated with champion Black Angus cattle, Delaplane today comprises almost two-thirds of the Middleburg American Viticultural Area [1] with the Delaplane zip code encompassing more working vineyards than any other on the east coast of the United States.

All content from Kiddle encyclopedia articles (including the article images and facts) can be freely used under Attribution-ShareAlike license, unless stated otherwise. Cite this article:
Delaplane, Virginia Facts for Kids. Kiddle Encyclopedia.