Kids Encyclopedia Facts
This page is about the northern Virginia town of Bristow. For the southwest Virginia city of Bristol, see Bristol, Virginia. 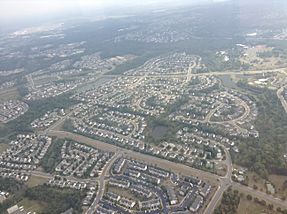 A birds-eye view of a residential part of Bristow.

Bristow is an unincorporated community of Prince William County in Northern Virginia about 30 miles (48 km) from Washington, D.C. In 2014, Bristow's postal area population was 29,346, a 287% increase since 2000; however, the Bristow community is formally included in the Linton Hall, Virginia census-designated place (CDP).

Bristow is home to Jiffy Lube Live outdoor concert stage which was formerly known as the Nissan Pavilion. 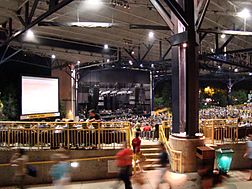 Bristow was voted "Best Place for Homeownership in Virginia" by the Nerd Wallet.

The majority of the Bristow Area was previously part of the Linton's Ford plantation, owned by the Linton family from the 18th century. In 1894, Sarah Linton converted to Catholicism and became a Benedictine nun, and she donated the property to the Roman Catholic Church, to be used to establish schools for poor girls and boys. Linton Hall Military School was founded in 1922, for which the main road was named: Linton Hall Road. In 1989, the school ended its military and boarding programs and became coeducational; it had already been renamed Linton Hall School many years earlier. In the late 20th century, much of the original property was sold to developers. Population increased in the Bristow area (and increased enrollment for the school.) The Linton Family (with the exception of Sarah Linton) are buried in the Linton Family Cemetery in the Braemar Community. The cemetery is legally unowned due to records loss when the Brentsville Courthouse burned in the Civil War. However maintenance is provided by the Braemar Community Association with coordination with the Benedictine Sisters at Linton Hall.

According to the Geographic Names Information System, Bristow has also been known as Briscoe, Bristoe, Bristoe Station, and Bristow Station. The Board on Geographic Names officially decided upon Bristow as the community's name in 1906.

The Brentsville Historic District and Davis-Beard House are listed on the National Register of Historic Places.

The former village proper was located on SR 619, Bristow Road, about 1 mile southwest of the intersection with SR 28, Nokesville Road, at the Norfolk Southern Railway crossing. There are a few businesses left at this location, and a crew change point for the railroad is just up the tracks from the railroad crossing. The new town center has, in general, relocated farther west around the Braemar Parkway area.

There has been major development since 2000 in both residential and commercial business that are continuing to expand. Bristow Manor Golf Club has a beautiful course, driving range and putting green. It was voted by Golf Digest as a 'Top 100 Places to Play from 1998-2000'.[1]

For keeping up with local news The Bristow Beat keeps residents informed of all the news affecting local area. [2]

Bristow is served by the Broad Run/Airport Virginia Railway Express station, which is in the southern-tier of the community. The station offers weekday service to inner suburbs in Fairfax County, Virginia and Washington, D.C.

The Manassas Regional Airport is located in the City of Manassas, adjacent to Bristow, and serves the area.

All content from Kiddle encyclopedia articles (including the article images and facts) can be freely used under Attribution-ShareAlike license, unless stated otherwise. Cite this article:
Bristow, Virginia Facts for Kids. Kiddle Encyclopedia.