Quantico Station is a census-designated place (CDP) in Prince William and Stafford counties in the U.S. state of Virginia, used by the Census Bureau to describe base housing. The population was 4,452 at the 2010 census.

The U.S. Marine Corps' Combat Development Command, which develops strategies for U.S. Marine combat and makes up most of the community of over 12,000 military and civilian personnel (including families), is based here. It has a budget of around $300 million and is the home of the Marine Corps Officer Candidates School. The Marine Corps Research Center at Quantico pursues equipment research and development, especially telecommunications, for the Marine Corps. The Marine Corps Brig, a military prison, was also located at Quantico, until its closure on 31 December 2011 and its subsequent demolition.

In 2001, the base was designated as part of the Quantico Marine Corps Base Historic District by the National Register of Historic Places. This district includes 122 buildings, two landscapes, a sculpture, and a water tower located within the Mainside area of the base. The contributing properties with separate entries include Tennessee Camp, Camp French, Commanding General's Quarters, and Rising Hill Camp.

The name "Quantico Station" is most often used to designate the train station in Quantico, Virginia where commuters use the Virginia Railway Express.

There were 1,389 households, out of which 77.2% had children under the age of 18 living with them, 91.3% were married couples living together, 4.3% had a female householder with no husband present, and 2.7% were non-families. 2.1% of all households were made up of individuals, and none had someone living alone who was 65 years of age or older. The average household size was 3.57 and the average family size was 3.57.

Before the establishment of the Marine base

The Quantico base is close to the Potomac River. The area was originally inhabited by the Patowomacks (Algonquian) in the 16th century. The name "Quantico" is presumed to come from a Native American term, and has been translated to mean "by the large stream". Accounts show that the area was first visited by European explorers in the summer of 1608 with settlement beginning later that year.

After the start of the 18th century, the area became popular because of tobacco trade in Aquia Harbor. Because traveling on muddy roads in those days was slow, many villages sprang up along the river and its inlets. Additionally, the area was a bustling stopping point on the north-south routes between New York and Florida.

Early settlements and plantations rooted along the flatlands bordering the Potomac. The hills west of the river remained essentially uninhabited until the early 18th century. Prince William County was organized in 1731, when the "Quantico Road" was also opened. This road gave vital access from the western part of the county to this area. By 1759, the road stretched across the Blue Ridge Mountains into the Shenandoah Valley.

The first military presence at Quantico came during the American Revolutionary War, when the Quantico Creek village became a main naval base for the Commonwealth of Virginia's 72-vessel fleet on which many state militia served.

The land was first visited by the Marine Corps in 1816, when a group of Marines traveling by ship to Washington were stopped when their vessel was halted by ice in the Potomac, forcing them to debark and march to the town of Dumfries, Virginia. Here they met a young Captain Archibald Henderson who lived close by. A generous-natured man, Henderson hired a wagon for them and sent them on their way.

During the American Civil War, control of the Potomac River became very important to the armies of both sides. The Confederates picked the Quantico Creek area on the Potomac to set up gun batteries. This enabled them to make full use of several points where their artillery could reach anything on the water, thus deterring Union use of the water highway. One of these sites included Shipping Point, the present day site of the Marine Corps Systems Command. Another site is Tennessee Camp, listed on the National Register of Historic Places in 2008.

While battles took place in Manassas, Virginia and Fredericksburg, Virginia, the gun positions around Quantico were used until the end of the war. After a 12-day battle at the Spotsylvania Courthouse where the Union lost about 25,000 soldiers, the war moved out of the Quantico area.

Following the war, railroads became an integral part of transportation in Virginia. In 1872, the Richmond, Fredericksburg and Potomac Railroad was formed when several railroads north and south met at Quantico Creek. This railroad still runs through the base and is used daily.

The village came to be called "Quantico" and was built by the Quantico Company. This was the start of a thriving tourist and fishing town that would later be encompassed by Marine Corps Base Quantico. 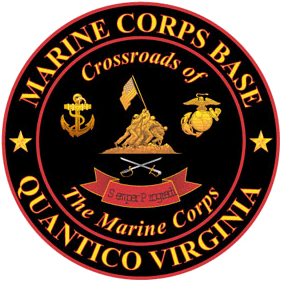 The former logo of MCB Quantico

Prior to the base's establishment, the land was owned by the Town of Quantico. Around the start of the 20th century, the Quantico Company was formed on Quantico Creek. By the beginning of the twentieth century, Quantico was being advertised as a recreational day trip. The Quantico Company promoted the town as a tourist and excursion center, and brought in tourists from Washington and Richmond by the steamer St. Johns and trains using the RF&P railroad lines and depot developed at Quantico in 1872. A beach was developed with dressing rooms and refreshment stands. In one week in 1916, Quantico was visited by 2,600 visitors who came by steamer or train.

By 1916, the Quantico Company began advertising Quantico as "The New Industrial City," and pushed for industry to come to the area. At the same time, the Quantico Shipyards were established on Hospital Point (the land that formerly held the Naval Medical Clinic but is now home to Marine Corps Systems Command) to build ocean freighters and oil tankers. With growing tensions of war in Europe, the construction of U.S. Navy ships was a major money-maker for the Quantico Shipyards. While the Town of Quantico was rapidly growing as a fishing village, excursion center and a shipbuilding center in early 1917, the town was not large or significant, and was suffering many financial difficulties.

Around the same time, Major General George Barnett, then Commandant of the Marine Corps, sent a board to find possible sites for a new Marine Corps base in the Washington, D.C., vicinity.

In 1917, Marine Barracks, Quantico was established on the land currently occupied by today's base. Marine Barracks personnel consisted of 91 enlisted men and four officers. Thousands of Marines were trained here during World War I. The Commanding General's Quarters was built in 1920 and added to the National Register of Historic Places in 2009. By 1920, the Marine Corps schools were founded, as Colonel Smedley Butler put it, "to make this post and the whole Marine Corps a great university". These schools eventually developed into today's Marine Corps University. Virtually all Marine officers receive their basic training here, as well as enlisted technicians from many different disciplines. Around the same time, as a part of these schools, a football team was established at the base, playing as a college football team. Until its disbanding in 1972, the team played against various NCAA Division I college teams, as well as teams from other military installations.

In 1942, over 50,000 acres (20,000 ha) were purchased by the federal government and added to Quantico, making up what is now the base west of Interstate 95. The expansion was needed for additional range and maneuver training areas during World War II.

On the night of 21 March 2013, a Marine opened fire killing two other Marines before killing himself.

In 2015, the base held first Department of Defense organized Warrior Games.

The Corps' Combat Development Command, which develops strategies for Marine combat and makes up most of the community of over 12,000 military and civilian personnel (including families) is based here. It has a budget of around $300 million and is the home of the Marine Corps Officer Candidates School. The Marine Corps Research Center at Quantico pursues equipment research and development, especially telecommunications, for the Marine Corps. The Marine Corps Brig, a military prison, was formerly located at Quantico.

The base was designated as part of the Quantico Marine Corps Base Historic District by the National Register of Historic Places in 2001. This district includes 122 buildings, two landscapes, a sculpture, and a water tower located within the Mainside area of the base. The contributing properties with separate entries include Tennessee Camp, Camp French, Commanding General's Quarters, and Rising Hill Camp.

It is the site of the Marine Corps Combat Development Command and Marine Helicopter 1 HMX-1. HMX-1 was the first helicopter squadron to provide rapid transportation of U.S. Presidents, a mission they have continued to carry out to the present day. 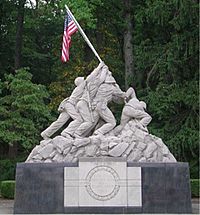 Marine Corps Memorial at the front gate of MCB Quantico

The base is the home of major training institutions for both the Marine Corps and federal law enforcement agencies, including:

A replica of the United States Marine Corps War Memorial, depicting the 2nd U.S. flag-raising on Iwo Jima, stands at the entrance to the base. (The original memorial stands at the north end of Arlington National Cemetery.)

Marine Corps Base Quantico and the Potomac River surround the town of Quantico. Access to the town is possible only through the base, the Amtrak train station, or from the river.

All content from Kiddle encyclopedia articles (including the article images and facts) can be freely used under Attribution-ShareAlike license, unless stated otherwise. Cite this article:
Marine Corps Base Quantico Facts for Kids. Kiddle Encyclopedia.