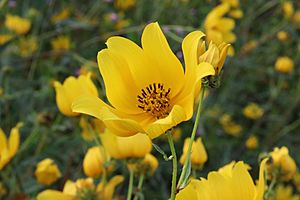 Wildflowers in the refuge 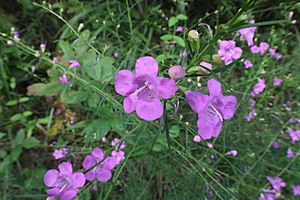 Wildflowers in the refuge

When the Army obtained the site in 1950 for use as a radio transmitting station, fields of antennas replaced cows and crops. In the 1970s, the base's mission shifted to top secret research. Electromagnetic pulse testing and sight lines for security kept the vegetation low, primarily in grasslands. When the base closed in the 1990s, the U.S. Fish and Wildlife Service was able to continue to preserve these grasslands as wildlife habitat.

The refuge has a mix of wetlands, forest, and native grasslands that provides a diversity of habitats for wide variety of species. Wetland habitats cover about 50% of the refuge and include wet meadows, bottomland hardwoods, open freshwater marsh, and tidally influenced marshes and streams. Upland meadows and mature oak-hickory-beech forest are interspersed among the wetlands. The unusual number and interspersion of habitats provides visitors an opportunity to view a wide variety of wildlife species and habitats in a relatively small area. Noted for its grassland nesting birds, neo-tropical migrants and raptors, the refuge also hosts wildlife common to Virginia. Over 220 species of birds, over 600 species of plants, and 65 species of butterflies have been documented on the refuge. Many of the bird species are uncommon or rare in the region.

Approximately four miles (6.4 km) of old patrol roads are reserved for foot traffic, rotating between three two-mile (3.2 km) loops. Information is posted at the visitor contact station and at trail heads. Wildlife Drive also contains two miles (3.2 km) of old patrol roads reserved for motor vehicle and bicycle access. Vehicles can serve as a mobile blind, allowing visitors closer views; the blind effect is also why drivers and passengers must stay in their vehicles while on the drive.

All content from Kiddle encyclopedia articles (including the article images and facts) can be freely used under Attribution-ShareAlike license, unless stated otherwise. Cite this article:
Occoquan Bay National Wildlife Refuge Facts for Kids. Kiddle Encyclopedia.