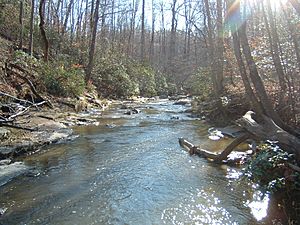 The North Fork of Quantico Creek, from the North Valley trail 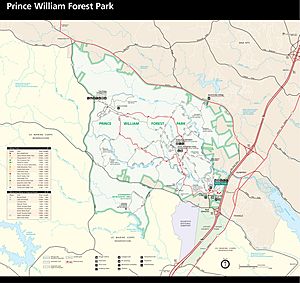 Prince William Forest Park was established as Chopawamsic Recreational Demonstration Area in 1936. Its location is in Triangle, Virginia, adjacent to the Marine Corps Base Quantico. The park is the largest protected natural area in the Washington, D.C. metropolitan region at over 16,000 acres (6,500 ha). Today, the park is a window into the past and serves as an example of what much of the East Coast once looked like centuries ago.

The park serves as the largest example of Eastern Piedmont forest in the National Park System (arguably, one of the most heavily altered ecosystems in North America). The park also protects the Quantico Creek watershed. It is a sanctuary for numerous native plant and animal species.

Prince William Forest Park was erected where once the town of Batestown stood. It was an enclave for freed slaves named for Mary Bates, the matriarch of the community.

Between 1933 and 1937, the Federal Government began implementing a Resettlement Administration program to form Chopawamsic Recreational Demonstration Area, where rural farmers were supposed to relocate for more fertile land. The RA bought 79 pieces of property in both Hickory Ridge and Batestown and condemned another 48, to form a new recreation area. However, the RA often made no effort to actually resettle the displaced residents.

The area residents resisted the relocation efforts, sometimes retreating into the park boundaries to escape detection. This continued until the beginning of World War II, where the park was taken over by the Office of Strategic Services as a spy training ground. The park was surrounded by barbed wire and fences, and patrolled by dogs and armed guards. All remaining forty-four holdouts were evicted, some literally carried away screaming.

At the end of the war, the displaced residents hoped their land would be restored, but to date these families have received no compensation. Instead, the property was turned over to the National Park Service and renamed Prince William Forest Park.

A variety of recreational opportunities are available, which include:

The park’s cultural resources are also varied. They include:

Tortoises such as the Eastern box turtle can be found in Prince William Forest Park, especially after a light rain. There are a number of amphibians that inhabit the park. Toads and frogs, such as the American toad, American bullfrogs, and Cope's gray tree frog can be spotted in the park, as can salamanders such as the marbled salamander and the eastern red-backed salamander. A variety of bird species, such as the hooded warbler, the wood thrush, and the red-shouldered hawk, can also be found. The park is also home to mammalian species such as red fox, beaver, white-tailed deer, black bear, and coyote. They are spotted along the upper North Valley Trail. Eastern black rat snakes have been seen in and around logs and brush areas. Various skinks can be seen around sunny areas of the trails.

The land on which the park now resides was once used by Native Americans of the Archaic period. The Native Americans would use the area for hunting, gathering, and camping. Many artifacts from the archaic people have been found throughout the park.

The park was developed by Works Progress Administration workers after the Great Depression. Landscaping and structures were designed by National Park Service architects. Four camp areas are listed individually on the National Register of Historic Places:

The park also includes the Cabin Branch Pyrite Mine Historic District, listed on the National Register of Historic Places in 2002. The park itself was designed as the Prince William Forest Park Historic District in 2012.

All content from Kiddle encyclopedia articles (including the article images and facts) can be freely used under Attribution-ShareAlike license, unless stated otherwise. Cite this article:
Prince William Forest Park Facts for Kids. Kiddle Encyclopedia.