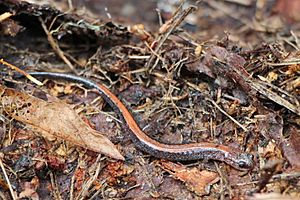 Red-backed salamander in its habitat

The red-backed salamander is a small terrestrial salamander, 5.7–10.0 cm (2.2–3.9 in) in total length (including tail), which usually lives in forested areas under rocks, logs, bark, and other debris. It is one of the most numerous salamanders throughout its range. The red-backed salamander exhibits color polymorphism and two color variations are common: the "red-backed" or "red-stripe" variety has a red dorsal stripe that tapers towards the tail, and the darker variety, known as the "lead-backed" (or simply "lead") phase, lacks most or all of the red pigmentation. The red-backed phase is not always red, but may actually be various other colors (e.g., yellow-backed, orange-backed, white-backed, or a rare erythristic morph in which the body is completely red). Both morphs have speckled black and white bellies. Additional color anomalies of this species also exist, including iridistic, albino, leucistic, amelanistic, and melanistic anomalies. These color morphs are rarer than the red-backed, lead-backed, and erythristic morphs, but still have been reported with consistency among varying populations of this species.

The skin of red-backed salamanders was found to contain Lysobacter gummosus, an epibiotic bacterium that produces the chemical 2,4-diacetylphloroglucinol and inhibits the growth of certain pathogenic fungi. 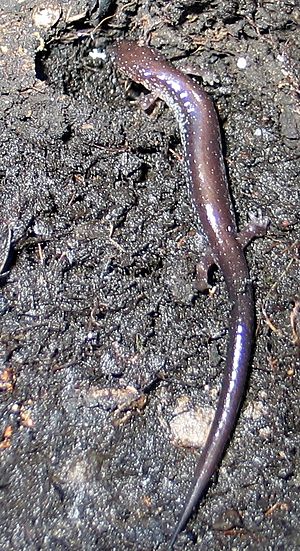 Plethodon cinereus, like many plethodon species, exhibit homing behavior, with homing of females to their nests, as well as non-attending females and males to a home range. This allows for essential contact between a female and her eggs in order to ensure their survival, as well as for non-attending females and males to explore beyond the home range when under predation pressures, or searching for food or cover, and return to their home range if a more favorable microhabitat is not found.

Males and females of P. cinereus typically establish separate feeding and/or mating territories underneath rocks and logs. However, some red-backed salamanders are thought to engage in social monogamy, and may maintain codefended territories throughout their active periods. Breeding occurs in June and July. Females produce from four to 17 eggs in a year. The eggs hatch in 6 to 8 weeks. Not much is known about the dispersal of neonates, although neonates and juveniles are thought to be philopatric.The species largely consumes invertebrates and other detritus dwellers. In some areas with good habitat, these salamanders are so numerous, their population densities may surpass 1,000 individuals per acre (2,471 individuals per hectare). Pokagon State Park in Indiana is one such place.

All content from Kiddle encyclopedia articles (including the article images and facts) can be freely used under Attribution-ShareAlike license, unless stated otherwise. Cite this article:
Red-backed salamander Facts for Kids. Kiddle Encyclopedia.