Cope's gray tree frog (Hyla chrysoscelis, also called the southern gray tree frog) is a species of tree frog found in the United States. It is almost indistinguishable from the gray tree frog, Hyla versicolor, and shares much of its geographic range. Both species are variable in color, mottled gray to gray-green, resembling the bark of trees. These are tree frogs of woodland habitats, though they will sometimes travel into more open areas to reach a breeding pond. The only readily noticeable difference between the two species is the call — Cope's has a faster-paced and slightly higher-pitched call than H. versicolor. In addition, H. chrysoscelis is reported to be slightly smaller, more arboreal, and more tolerant of dry conditions than H. versicolor. It is important to note that there is no external way to tell the two species apart other than their call, and their range.

Edward Drinker Cope described the species in 1880. The specific name chrysoscelis is from Greek chrysos, gold, and scelis, leg. 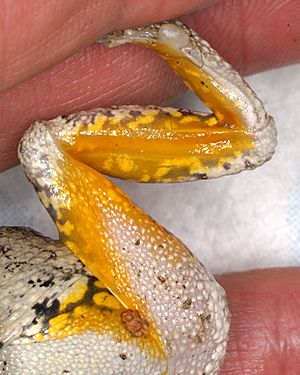 Both H. chrysoscelis and H. versicolor have bright-orange patches on their hind legs, which distinguishes them from other tree frogs, such as H. avivoca. The bright-yellow pattern is normally hidden, but exposed when the frog leaps. This "flash pattern" likely serves to startle a predator as the frog makes its escape. Similar hidden bright patterns are common in various Lepidoptera, for instance moths of the genus Catocala. Both species of gray tree frogs are slightly sexually dimorphic. Males have black or gray throats in the breeding season, while the throats of the females are lighter. 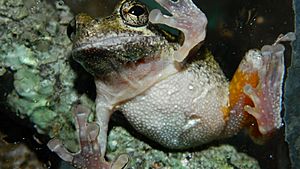 The range of H. chrysoscelis is more southerly; it is apparently the species found in the lower elevation Piedmont and Coastal Plain of Virginia and the Carolinas. In those areas, H. versicolor may be present only in the Appalachians. The bird-voiced tree frog, H. avivoca, is similar to H. chrysoscelis and H. versicolor, but is smaller (25–50 mm in length vs 32–62 mm for the gray tree frog). 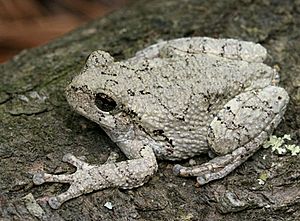 In the Southeastern United States, Cope's gray tree frog breeds and calls from May to August. Isolated males start calling from woodland areas during warm weather a week or more before migrating to temporary ponds to breed. There they form aggregations (choruses) and call together. Chorusing is most frequent at night, but individuals often call during daytime in response to thunder or other loud noises. Eggs are laid in batches of 10 to 40 on the surfaces of shallow ponds and other small bodies of water. These temporary bodies of water usually lack fish. Eggs hatch in about five days and metamorphosis takes place at about 45–65 days.

Hyla chrysoscelis is capable of surviving temperatures as low as –8 °C.

All content from Kiddle encyclopedia articles (including the article images and facts) can be freely used under Attribution-ShareAlike license, unless stated otherwise. Cite this article:
Cope's gray treefrog Facts for Kids. Kiddle Encyclopedia.