Manassas National Battlefield Park is a unit of the National Park Service located in Prince William County, Virginia, north of Manassas that preserves the site of two major American Civil War battles: the First Battle of Bull Run, also called the First Battle of Manassas, and the Second Battle of Bull Run or Second Battle of Manassas. It was also where Confederate General Thomas J. Jackson acquired his nickname "Stonewall". The park was established in 1940 and listed on the National Register of Historic Places on October 15, 1966.

More than 700,000 people visit the battlefield each year. The Henry Hill Visitor Center, on Sudley Road by the south entrance to the park, offers exhibits and interpretation regarding the First Battle of Bull Run, including Civil War-era uniforms, weapons, field gear and an electronic battle map. The center offers the orientation film "Manassas: End of Innocence", as well as a bookstore.

A recent find in 2014 unearthed bone fragments that led to the discovery of the skeletal remains of two Union soldiers in what is now thought to be a Surgeon's Pit. The remains were found among the bones of several other limbs in the pit. Carbon dating shows that the pair died during the Battle of Second Manassas, also known as Second Bull Run, in August 1862. The remains were moved on Tuesday, June 19, 2018, and transferred from the National Park Service to the US Army who will be burying them in Arlington National Cemetery. 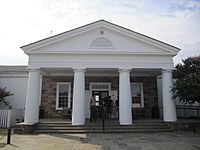 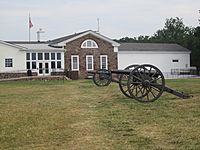 All content from Kiddle encyclopedia articles (including the article images and facts) can be freely used under Attribution-ShareAlike license, unless stated otherwise. Cite this article:
Manassas National Battlefield Park Facts for Kids. Kiddle Encyclopedia.