Annandale is a census-designated place (CDP) in Fairfax County, Virginia. The population of the CDP was 43,363 as of the 2020 United States Census. It is home to the oldest and largest branch of the Northern Virginia Community College system, and to one of the D.C. area's Koreatowns.

Annandale derives its name from Annandale in Scotland.

According to the United States Census Bureau, the CDP has a total area of 7.86 square miles (20.4 km2), all of it land. The area is part of the coastal plain located just east of the Fall Line separating the coastal plain of Virginia from the piedmont. It is characterized by rolling hills, stream valleys, and heavy red clay soils.

The Annandale region is bisected by Accotink Creek, which in Colonial times was a primary link for ocean-going ships that would load tobacco and other goods where Little River Turnpike - Annandale's oldest road and the first toll road in America - crosses it. With the construction of the Springfield Dam in 1918, Lake Accotink was created to serve as a water source for World War I Army Camp A.A. Humphreys. In 1960, when the lake was no longer needed by the Army, the Fairfax County Park Authority leased the land and finally bought the site in 1965. Today, Lake Accotink is a popular recreation area with bike trails, fishing and boat rentals.

Also along Accotink Creek runs the Fairfax Cross County Trail (CCT) which provides uninterrupted hiking, biking, running and cross-country skiing for 20 miles (32 km) in Annandale. The CCT meanders through parks and forests filled with deer, fox, geese and numerous species of native birds. In the spring, Accotink Creek is stocked with trout and fishermen are often seen wading in its waters. 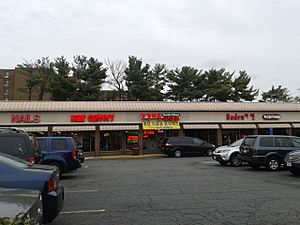 Annandale is noted for Korean businesses

According to the Demographic Statistical Atlas of the United States, as of 2018, the largest ancestry groups were:

In the video game Fallout 3, the city is used as a location under the name Andale. The city is inhabited by a group of inbred cannibals who proudly go by the title of the "Friendliest Town in the USA."

Downtown Annandale is also referred to by some as Koreatown as there were roughly 929 South Korean-owned businesses as of 2006 and 67 South Korean-owned restaurants as of July 1, 2010, operating in the Washington Metropolitan Area, according to the GIANT Directory for South Korean-owned and Korean-American businesses. They were developed beginning in the 1990s by Korean immigrants to the region. The influx of Koreans to Northern Virginia and Annandale can be traced to the ease of commute into the District of Columbia for federal employees, the quality of its schools, and even the opening of an office of the Fairfax County Economic Development Authority in Seoul. Most of the businesses and restaurants initially catered primarily to South Korean expatriates, but some had a diverse clientele from the beginning. In the past, county officials sought to make Annandale more diverse by encouraging Korean businesses to include English in their signs. Today, Fairfax County is home to nearly 40,000 Koreans and is seen by many Washingtonians as a destination for karaoke, BBQ, and bingsu. There are now multiple generations of Korean-American businesses and restaurants in Annandale and they attract a broad demographic of customers.

Annandale High School has one of the area's few International Baccalaureate Degree programs. Ensembles within the school's choral program have performed at the Kennedy Center in Washington, D.C., as well as many European venues.

The oldest and largest branch of the Northern Virginia Community College system is also located within Annandale and was founded in 1965. A focal point of "NOVA", a commonly used nickname of the community college, is the Richard J. Ernst Community Cultural Center which is a 66,000-square-foot (6,100 m2) facility containing a 525-seat, state-of-the-art theater with satellite downlink and video projection capability, an 11,000-square-foot (1,000 m2) gymnasium/exhibition hall, a light-filled atrium entrance and a two-story art gallery. The college opened with 761 students, and today has more than 75,000 students and 2,600 faculty and staff members, and has six permanent campus sites across Northern Virginia. The student body consists of people from more than 180 countries.

Notable individuals who were born in and/or have lived in Annandale include actor Mark Hamill; country music performer Kelly Willis; Christopher McCandless, the subject of author Jon Krakauer's 1996 book, Into the Wild; and Fawn Hall, a notable figure in the Iran-Contra affair. Soccer goalkeeper Bill Hamid is from Annandale.

All content from Kiddle encyclopedia articles (including the article images and facts) can be freely used under Attribution-ShareAlike license, unless stated otherwise. Cite this article:
Annandale, Virginia Facts for Kids. Kiddle Encyclopedia.