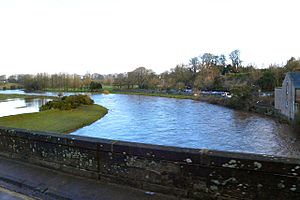 Annan, with Mote of Annan to the right 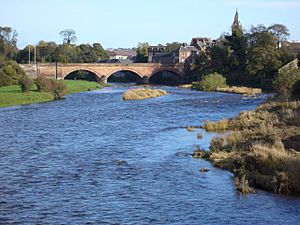 Annan ( AN-ən; Scottish Gaelic: Inbhir Anainn) is a town and former royal burgh in Dumfries and Galloway, south-west Scotland. Historically part of Dumfriesshire, its public buildings include Annan Academy, of which the writer Thomas Carlyle was a pupil, and a Georgian building now known as "Bridge House". The Town Hall was built in Victorian style in 1878, using the local sandstone. Annan also features a Historic Resources Centre. In Port Street, some of the windows remain blocked up to avoid paying the window tax.

Each year on the first Saturday in July, Annan celebrates the Royal Charter and the boundaries of the Royal Burgh are confirmed when a mounted cavalcade undertakes the Riding of the Marches. Entertainment includes a procession, sports, field displays and massed pipe bands.

Annan stands on the River Annan—from which it is named—nearly 2 miles (3 kilometres) from its mouth, accessible to vessels of 60 tons as far as Annan Bridge and 300 tons within 1⁄2 mi (800 m) of the city. It is 15 mi (24 km) from Dumfries by rail, in the region of Dumfries and Galloway on the Solway Firth in the south of Scotland. Eastriggs is about 3 mi (5 km) to the east and Gretna is about 8 mi (13 km) to the east.

Annan Castle formed the original home of the "de Brus" family, later known as the "Bruces", lords of Annandale, which most famously produced Robert the Bruce. It was at Annan in December 1332 that Bruce supporters overwhelmed Balliol's forces to bring about the end of the first invasion of Scotland in the Second War of Scottish Independence. The Balliols and the Douglases were also more or less closely associated with Annan.

During the period of the Border lawlessness the inhabitants suffered repeatedly at the hands of moss-troopers and through the feuds of rival families, in addition to the losses caused by the Scottish Wars of Independence. During his retreat from Derby, Bonnie Prince Charlie stayed in the High Street at the inn where L'Auberge now stands.

With the river embanked, Annan served as a maritime town whose shipyards built many clippers and other boats. A cairn on the jetty commemorates Robert Burns, who worked as an exciseman here in the 1790s. Although the port is now mainly dry, a few stranded boats remain.

Annan Academy has a history that goes back to the 17th century Its current campus on St John's Road primarily dates to the 1960s.

After the Acts of Union 1707, Annan, Dumfries, Kirkcudbright, Lochmaben and Sanquhar formed the Dumfries district of burghs, returning one member between them to the House of Commons of Great Britain. Annan previously formed a constituency of the Parliament of Scotland and the Convention of Estates. In 1871, the Dumfries Burghs had a population of 3172 and the royal burgh of Annan, 4174, governed by a provost and 14 councillors. A Harbour Trust was established in 1897 to improve the port.

By 1901, the population was 5805, living principally in red sandstone buildings.

The train turntable was designed and developed in Annan; it can be seen today in the York Railway Museum.

Just outside the town, the Chapelcross nuclear power station has now shut down and is being decommissioned. The four cooling towers were demolished in 2007.

To the east of the town lies the settlement of Watchill and the similarly named Watchhall.

Part of the A75, between Annan and Dumfries, is reported to be haunted.

Annandale distillery has now officially re-opened in Annan, which last produced a Lowland Malt 90 years ago, although it is still in early stages.

Annan is served by several churches of different denominations, including:

There is also a local interchurch group, known as Annandale Churches Together.

Annan Bridge, a stone bridge of three arches, built between 1824 and 1827, carries road traffic over the River Annan. It was designed by Robert Stevenson and built by John Lowry. There is also a railway bridge and a nearby pedestrian bridge over the Annan. It is still served by the Annan railway station, the old Solway Junction Railway station Annan Shawhill having closed to passengers in 1931 and freight in 1955.

Annandale Way is a 53 mi (85 km) walking route that was opened in September 2009. The route runs through Annandale, from the source of the River Annan to the sea; it passes through the town of Annan and offers interesting walking both up river and down from the town.

In the 19th century, Annan was connected to the Glasgow & South Western Railway, the Caledonian Railway, and the Solway Junction Railway. It exported cured hams, cattle, sheep, and grain to England; it also produced cotton goods, ropes, ships, and salmon. By the First World War, it was also a center of bacon-curing, distilling, tanning, sandstone quarrying, and nursery-gardening.

All content from Kiddle encyclopedia articles (including the article images and facts) can be freely used under Attribution-ShareAlike license, unless stated otherwise. Cite this article:
Annan, Dumfries and Galloway Facts for Kids. Kiddle Encyclopedia.