Dumfries and Galloway facts for kids 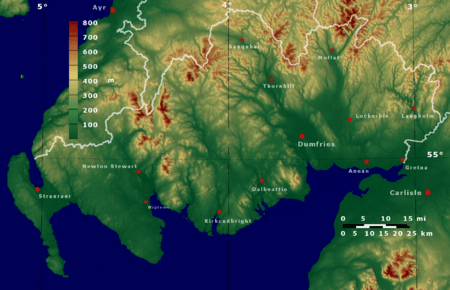 Topographic map of Dumfries and Galloway

Dumfries and Galloway (Scots: Dumfries an Gallowa, Scottish Gaelic: Dùn Phrìs is Gall-Ghaidhealaibh) is one of 32 unitary council areas of Scotland and is located in the western Southern Uplands. It comprises the historic counties of Dumfriesshire, Stewartry of Kirkcudbright and Wigtownshire, the latter two of which are collectively known as Galloway. The administrative centre is the town of Dumfries.

Following the 1975 reorganisation of local government in Scotland, the three counties were joined to form a single region of Dumfries and Galloway, with four districts within it. Since the Local Government etc. (Scotland) Act 1994, however, it has become a unitary local authority. For lieutenancy purposes, the historic counties are largely maintained with its three lieutenancy areas being Dumfries, Wigtown and the Stewartry of Kirkcudbright.

To the north, Dumfries and Galloway borders East Ayrshire, South Ayrshire and South Lanarkshire; in the east the Borders; and to the south the county of Cumbria in England and the Solway Firth. To the west lies the Irish Sea.

The Dumfries and Galloway Council region is composed of counties and their sub-areas. From west to east:

The term 'Dumfries and Galloway' has been used since at latest the 19th century - by 1911 the three counties had a united Sheriffdom under that name. Dumfries and Galloway covers the majority of the Western area of the Southern Uplands, it also hosts Scotland's most Southerly point, at the Mull of Galloway in the west of the region.

Water systems and transport routes through the Southern Uplands

The region has a number of south running water systems which break through the Southern Uplands creating the main road, and rail, arteries north/south through the region and breaking the hills up into a number of ranges.

The A701 branches off the M74 at Beattock, goes through the town of Moffat, climbs to Annanhead above the Devil's Beef Tub (at the source of the River Annan) before passing the source of the River Tweed and carrying on to Edinburgh. Until fairly recent times the ancient route to Edinburgh travelled right up Annandale to the Beef Tub before climbing steeply to Annanhead. The present road ascends northward on a ridge parallel to Annandale but to the west of it which makes for a much easier ascent.

From Moffat the A708 heads north east along the valley of Moffat Water (Moffatdale) on its way to Selkirk. Moffatdale separates the Moffat hills (to the north) from the Ettrick hills to the south.

There are three National Scenic Areas within this region.

County councils as administrative authorities were created in 1889. The present-day, "Dumfries and Galloway Council Area" exist for administrative purposes.

The historic counties of Britain, at least most of them, have existed for around 1,000 years or more and are often logical geographical entities in themselves. In Scotland they originated as Sheriffdoms consisting of a group of parishes over which the sheriff had jurisdiction, replacing native "Celtic" forms of government with Norman feudal structures. 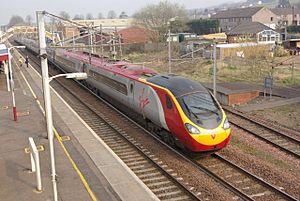 The region has seven working railway stations. All are on the Glasgow South Western Line, except Lockerbie which is on the West Coast Main Line.

The area is served by buses which connect the main population centres. Express bus services link the main towns with Glasgow, Ayr, Edinburgh and Carlisle. Local bus services are also operated across the region. 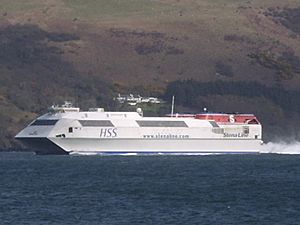 Dumfries and Galloway is home to two ports which have services to Northern Ireland, both are in the West of the region. Stena Line and P&O Irish Sea both have a port in the village of Cairnryan.

The region also has no commercial airports; the nearest are Glasgow Prestwick Airport and Carlisle Lake District Airport. The region does host a number of private airfields. The town of Lockerbie was the scene of the Pan Am Flight 103 terrorist attack on December 21, 1988.

The main roads to and from the region are:

The Port Road to Stranraer being the last to go in June 1965 leaving only the original G&SWR main line open to serve the Stranraer. The Beeching Axe cutting the Castle Douglas and Dumfries Railway and Portpatrick and Wigtownshire Railway has resulted in adverse mileage to connect Stranraer with a longer line via Kilmarnock and Ayr.

The region is known as a stronghold for several rare and protected species of amphibian, such as the Natterjack toad and the Great crested newt. There are also RSPB Nature Reserves at the Mull of Galloway, and Mereshead (near Dalbeattie on the Solway Firth) 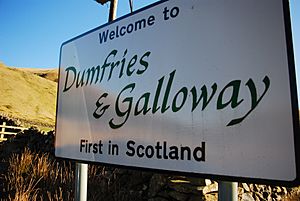 There are five of the world class 7Stanes mountain biking centres in Dumfries and Galloway at Dalbeattie, Mabie, Ae, Glentrool and Kirroughtree. The Sustrans Route 7 long distance cycle route also runs through the region. There is excellent hill walking in the Moffat Hills, Lowther Hills the Carsphairn and Scaur Hills and Galloway Hills. The Southern Upland Way coast to coast walk passes through Dumfries and Galloway and the 53 mile long Annandale Way travels from the Solway Firth into the Moffat hills near the Devil's Beef Tub. There is also fresh water sailing on Castle Loch at Lochmaben and at various places on Loch Ken Loch Ken also offers waterskiing and wakeboarding. The Solway Firth coastline offers endless fishing, caravaning and camping, walking and sailing opportunities.

Dumfries and Galloway is well known for its arts and cultural activities as well as its natural beauty.

All content from Kiddle encyclopedia articles (including the article images and facts) can be freely used under Attribution-ShareAlike license, unless stated otherwise. Cite this article:
Dumfries and Galloway Facts for Kids. Kiddle Encyclopedia.