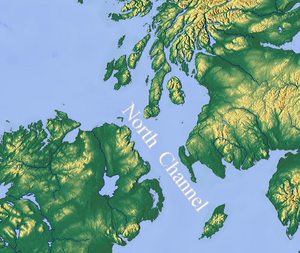 Map of the North Channel

The North Channel or Irish Channel (known in Irish and Scottish Gaelic as Sruth na Maoile, in Scots as the Sheuch) is the strait between north-eastern Northern Ireland and south-western Scotland. 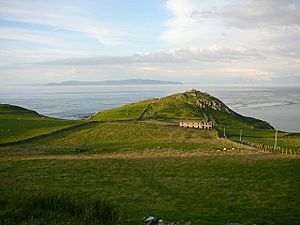 View from Torr Head, County Antrim to the Mull of Kintyre, looking over the Straits of Moyle.

The channel connects the Irish Sea with the Atlantic Ocean, and is part of the marine area officially classified as the "Inner Seas off the West Coast of Scotland" by the International Hydrographic Organization (IHO).

The Straits of Moyle (Sruth na Maoile in Irish and Scottish Gaelic) or Sea of Moyle is the name given to the narrowest expanse of sea in the North Channel between northeastern Northern Ireland (County Antrim) and southwestern highlands of Scotland (Mull of Kintyre). The distance between the two shores is approximately 12 miles (19 km) at its closest point, and thus it is possible to see across in clear weather conditions. The Straits gave their name to Moyle District Council, a local government area in Northern Ireland, and are famed in Irish Celtic mythology through their association with the Children of Lir.

This strait was formerly known as the Irish Channel. In the 19th century, Alexander Keith Johnston's suggested name St Patrick's Channel had currency, but it was rejected by the hydrographic department.

The Channel was a favourite haunt of privateers preying on British merchant shipping in wars until the 19th century; in 1778, during the American Revolutionary War it was also the site of a naval duel between American captain John Paul Jones's USS Ranger and the Royal Navy's HMS Drake. It is crossed by many ferry services. In 1953, it was the scene of a serious maritime disaster, the sinking of the ferry Princess Victoria.

The Irish Long Distance Swimming Association (ILDSA) has provided authentication observers for swimmers attempting to cross the approximately 35-kilometre (22 mi) span between Northern Ireland and the Mull of Galloway. According to the ILDSA, this was first accomplished in 1947 by Tom Blower. The first two-way crossing was completed by a six-person relay team on 28 July 2015.

The North Channel is part of the Ocean's seven, a set of seven long-distance open-water swims considered the marathon swimming equivalent of the Seven Summits mountaineering challenge.

In Northern Ireland, Unionist political leaders for decades lobbied the British government to construct a railway tunnel under the Channel, to better link Northern Ireland with the rest of the United Kingdom. In August 2007 the Centre for Cross-Border Studies proposed the construction of a 34-kilometre-long (21 mi) long rail bridge or tunnel, estimating that it might cost about £3.5 billion. In the Victorian era, engineers proposed a rail tunnel between Stranraer and Belfast.

In February 2020, the Prime Minister's Office announced that it had initiated work to examine the feasibility of bridge between Scotland and Northern Ireland. The shortest route – 16 km (10 mi) coast to coast – is that between Campbeltown on the Kintyre peninsula (about 220 km (140 mi) from Glasgow via minor roads) and Ballycastle, County Antrim (about 90 km (56 mi) from Belfast). The shortest route between Glasgow and Belfast is the route used by the existing ferry service, that via Portpatrick/Stranraer (about 150 km (93 mi) from Glasgow) and Larne (about 35 km (22 mi) from Belfast), a coast-to-coast distance of 45 kilometres (28 mi). This route would require the bridge towers to be erected through Beaufort's Dyke, a 200–300 m (700–1,000 ft) deep trench, heavily contaminated by 'large quantities' of munitions ('small arms, high explosives and incendiary devices').

First Minister of Scotland Nicola Sturgeon said her mind was not closed to the idea but added "if he [the prime minister] has got £20bn to build such a bridge going spare at the moment - that could be spent on more important priorities".

All content from Kiddle encyclopedia articles (including the article images and facts) can be freely used under Attribution-ShareAlike license, unless stated otherwise. Cite this article:
North Channel (Great Britain and Ireland) Facts for Kids. Kiddle Encyclopedia.