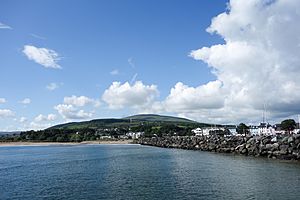 View from the Rathlin boat

Ballycastle (from Irish: Baile an Chaistil, meaning "town of the castle") is a small seaside town in County Antrim, Northern Ireland. It is on the north-easternmost coastal tip of Ireland, in the Antrim Coast and Glens Area of Outstanding Natural Beauty. The harbour hosts the ferry to Rathlin Island, which can be seen from the coast. The Ould Lammas Fair is held each year in Ballycastle on the last Monday and Tuesday of August. Ballycastle is the home of the Corrymeela Community.

Ballycastle had a population of 5,237 at the 2011 census. It was the seat and main settlement of the old Moyle District Council. 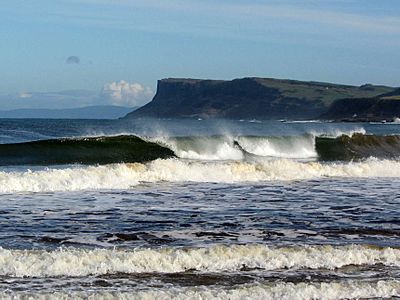 Breakers on Antrim Coast near Ballycastle, Ireland, with cliffs of Fair Head. Scotland appears in the distance on clear days. 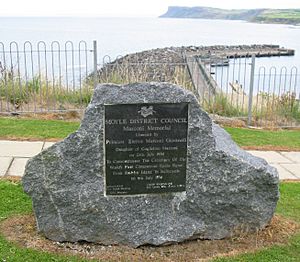 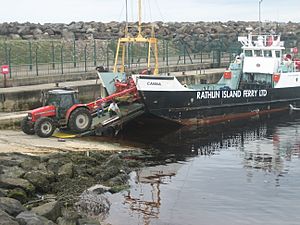 Bus services in Ballycastle are operated by Translink.

A ferry, currently operated by the Rathlin Island Ferry Company, runs between the town and Rathlin Island as part of a lifeline service. The ferry service to the island was formerly operated by Caledonian MacBrayne. Ferries formerly sailed between Ballycastle and Campbeltown in Scotland, but the service was suspended in June 2002. A passenger ferry service to Campbeltown, and Port Ellen on Islay, operated by Kintyre Express, now runs seven days during summer months and on Mondays and Fridays during winter months.

Ballycastle railway station opened on 18 October 1880, but was closed on 3 July 1950. It was on the Ballycastle Railway, a narrow gauge railway which ran 17 miles (27 km) connecting Ballycastle to Ballymoney station, on the Belfast and Northern Counties Railway (BNCR), later Northern Counties Committee (NCC) and now part of Northern Ireland Railways.

In the past, there has been unrest during Orange Order parades in the town. In 2001, there was serious public disorder at the 12 July parade. As a result of this, the Silver Plains flute band from nearby Moyarget, was banned from marching in the town due to allegations of sectarian conduct and paramilitary trappings. The North Antrim Orange Order held their annual parade in the town in 2006. Following discussions between residents, the Orange Order, business owners, and Sinn Féin the parade passed off without incident.

As with the rest of the British Isles, Ballycastle experiences a maritime climate with cool summers and mild winters. The nearest official Met Office weather station for which online records are available is at Ballypatrick Forest, about 4 miles East-southeast of Ballypatrick.

Ballycastle Golf Club offers an 18-hole championship course open year-round to both members and non-members. The course is one of the four courses played each June in the world-renowned Causeway Coast Golf Tournament.

During the Summer, the town hosts two tennis tournaments, one of which is run by the Moyle District Council.

Ballycastle United Football Club combined with Moyle FC in 2011, and the team now competes in the Coleraine and District morning league.

Ballycastle Bowling Club has a scenic outdoors setting that is a feature of the town's sea-front. 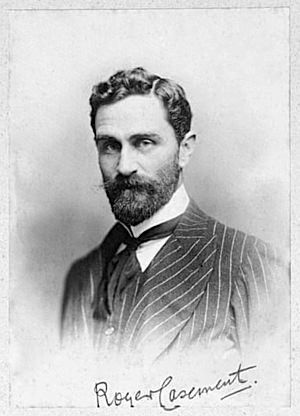 All content from Kiddle encyclopedia articles (including the article images and facts) can be freely used under Attribution-ShareAlike license, unless stated otherwise. Cite this article:
Ballycastle, County Antrim Facts for Kids. Kiddle Encyclopedia.