Glens of Antrim facts for kids 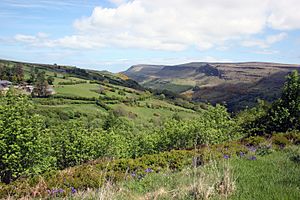 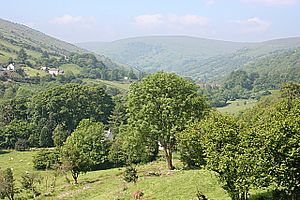 Glendun: the Glendun Viaduct can just be made out among the trees in the middle distance, and on the skyline is Crocknamoyle

The Glens of Antrim, known locally as simply The Glens, is a region of County Antrim, Northern Ireland. It comprises nine glens (valleys), that radiate from the Antrim Plateau to the coast. The Glens are an area of outstanding natural beauty and are a major tourist attraction in north Antrim.

The main towns and villages in the Glens are Ballycastle, Cushendun, Cushendall, Waterfoot, Carnlough and Glenarm.

The Lordship of the Glens

From the mid-13th century onward, the Lordship of The Glen belonged to the Bissett family, Anglo-Norman in origin but Gaelicized over generations. In the mid-16th century it came into the ownership of the MacDonnells of Antrim.

From north to south, the nine glens are:

Glenravel is sometimes considered a tenth glen. It lies to the southwest of Glenballyeamon and Glenariff, being separated from the latter by the Glenariff forest park.

The main settlements of Glenravel are Cargan, Martinstown and Skerry (Newtowncrommelin). 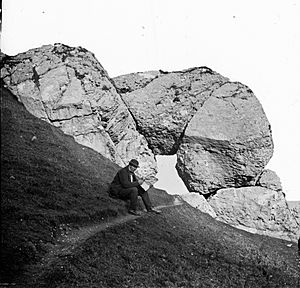 In the Glens there is evidence of Neolithic communities. At Glencloy, Neolithic people had megalithic tombs in the uplands, while they lived in settlements near the coast at the end of the valley. The beaches were sources of flint, as evidenced by stone tool (lithic) production sites in the glens.

All content from Kiddle encyclopedia articles (including the article images and facts) can be freely used under Attribution-ShareAlike license, unless stated otherwise. Cite this article:
Glens of Antrim Facts for Kids. Kiddle Encyclopedia.