Cushendall (from Irish: Cois Abhann Dalla, meaning "foot of the River Dall"), formerly known as Newtownglens, is a coastal village and townland (of 153 acres) in County Antrim, Northern Ireland. It is in the historic barony of Glenarm Lower and the civil parish of Layd, and is part of Causeway Coast and Glens district.

It is on the A2 coast road between Glenariff and Cushendun, in the Antrim Coast and Glens Area of Outstanding Natural Beauty. It lies in the shadow of the table topped Lurigethan Mountain and at the meeting point of three of the Glens of Antrim: Glenaan, Glenballyemon and Glencorp. This part of the Irish coastline is separated from Scotland by the North Channel, with the Mull of Kintyre about 16 miles away. In the 2001 Census it had a population of 1,241 people, with a 2008 estimate of 1,363.

Much of the historic character of the 19th century settlement on the north bank of the River Dall remains. In 1973 it was designated as only the second Conservation Area in Northern Ireland, and includes the largely intact Irish Georgian buildings of the town's four original streets. Since 1990, Cushendall has hosted the Heart Of The Glens festival every August. Thomas D'Arcy McGee, a father of Canadian Confederation, spent his childhood in Cushendall when his father, who worked for the Coast Guard Service, was posted there.

Cushendall is classified as a village, and the population of Cushendall on census day (27 March 2011) was 1,280 people. Of these: 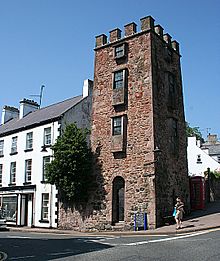 The Curfew Tower in the centre of the village was built by then landlord of the town, Francis Turnley, in 1817, to confine riotous prisoners. Dan McBride, an army pensioner, was given the job of permanent garrison and was armed with one musket, a bayonet, a brace of pistols and a thirteen-feet-long pike. The tower is now owned by artist Bill Drummond.

Oisín's Grave, off the main Cushendall to Ballymoney road, is a megalithic court cairn on a hillside in Lubitavish, near the Glenann River. It is believed to be the burial place of Oísín - the Celtic Warrior Poet. A stone cairn was erected here in 1989 in memory of John Hewitt, the poet of the Glens.

The ruins of Layd Church (grid ref:324428), a Franciscan foundation possibly partially from the 13th century, are found 1.5 km north of Cushendall. They are also accessible by a cliff path from Cushendall, as well as by road. There are old vaults in the churchyard and it was one of the main burial places of the MacDonnells. There is a stone cross memorial to Dr James MacDonnell, one of the organisers of the last Belfast Festival of Harpists in 1792 and pioneer of the use of chloroform in surgery. By the gate of the churchyard is a holestone and nearby two 'corp stones' on which coffins were rested. Layd Church saw service as a parish church from 1306 until about 1790.

Red Bay Castle, situated between the villages of Cushendall and Waterfoot. Built by the Bisset family in the 14th century and later occupied by the MacDonnells, one of the outposts of the Kingdom of Dál Riata.

Glenariff Forest Park, 5 miles inland from Cushendall, covers an area of 1185 hectares. In the park are two small rivers containing spectacular waterfalls, tranquil pools and stretches of fast flowing water tumbling through rocky gorges. There is a café, toilets and an exhibition centre. Four way-marked trails of varying length (1–9 km) wind through the forest leading you into some of the park's wooded areas. One follows the Glenariff River with its famous waterfalls and passes through the National Nature Reserve.

The Troubles in Cushendall

On the night of 23 June 1922, in the aftermath of the Irish War of Independence, several trucks of Ulster Special Constabulary officers and British soldiers arrived in Cushendall and fired on civilians. Special Constables shot and killed three young Catholic men at close range: James (Seamus) McAllister, John Gore and John Hill. They claimed they were ambushed by the Irish Republican Army and returned fire, but a British government inquiry concluded that this was not true. The report was not made public for almost a century.

There were further violent incidents during the Troubles of the late 20th century.

Cushendall Beach Seen from the Salmon Rocks, with Lurigethan in the background.

Founded in 1906, the local club Ruairí Óg's plays its home matches at Páirc Mhuire in Cushendall. The first county senior championship was won in 1981, when the team captained by John Delargy beat Ballycastle Mc Quillans after a replay. The club have since won 13 County Championships. 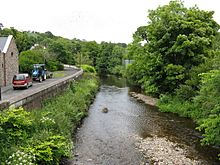 On 17 March 2016, Cushendall got into the All Ireland Club Hurling Championships but lost.

Cushendall Golf Club is a tricky little nine-hole course presenting many challenges for those wanting to improve their short game. The course is a great place for young players to develop and has produced numerous successful amateurs over the years. The course is located in a superb wooded valley with the Abhainn Dala (River Dall) running through its centre to the sea.

Established in 1951, Cushendall Sailing & Boating Club is the ideal place to learn basic introductory, as well as advanced Sailing skills. The club is situated in Red Bay and the views of the surrounding Glens of Antrim make a stunning backdrop for those on the waves. Cushendall CSBC has a sailing school which runs throughout the summer using RYA's learn-to-sail scheme. The school welcomes all ages and abilities, ensuring progression is achieved by each individual student.

The second Saturday of August each year during the Heart of the Glens Festival the Lurig Run takes place. This challenge is a 3.5 mile run consisting of a 1500 ft climb up the face of the Lurigethan mountain. Growing in popularity amongst the running elite it is seen as one of the most challenging organised runs across Northern Ireland. 400 people compete each year.

Cushendall offers a diverse range of shops, which offer local gifts and crafts, as well as many other items.

There is also an annual vintage car rally which is held in the village.

All content from Kiddle encyclopedia articles (including the article images and facts) can be freely used under Attribution-ShareAlike license, unless stated otherwise. Cite this article:
Cushendall Facts for Kids. Kiddle Encyclopedia.