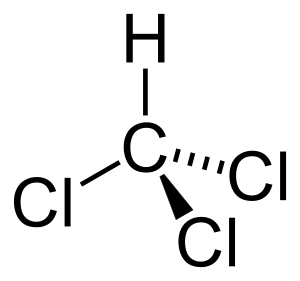 Structure of a molecule of chloroform

Chloroform (also called trichloromethane) is a chemical substance. It is an organic compound. Chloroform is one of the intermediate substances that occur in the production of Polytetrafluoroethylene, better known as Teflon. Chloroform is used as a solvent. In the 19th century, it was a widely used anaesthetic.

The first who reported to have produced Chloroform was the French chemist Eugène Soubeiran, in 1831. Soubeiran took acetone and ethanol, and used bleach powder for the reaction. The American physician Samuel Guthrie prepared gallons of the material and described its "deliciousness of flavor." Independently, Justus von Liebig also described it. Chloroform was named and chemically characterised in 1834 by Jean-Baptiste Dumas.

The four compounds get then separated with a distillation.

In laboratories, chloroform can be produced by giving sodium hypochlorite and acetone together.

The main uses of Chloroform are: 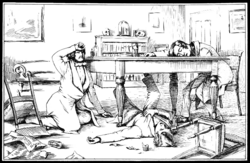 An illustration showing the effects of Chloroform,from the 1840s

Chloroform was used as an anaesthetic during childbirth and surgery, from about 1847. It replaced ether which was used before. Chloroform is very poisonous, and can cause breathing problems, and problems with the heart. Death from chloroform can come from cardiac arrest. When Chloroform is stored for a longer time period, it can decay into Phosgene. Phosgene was a chemical weapon (poison gas) used during the First World War. Chloroform can cause birth defects and lead to miscarriages. It may cause cancer.

All content from Kiddle encyclopedia articles (including the article images and facts) can be freely used under Attribution-ShareAlike license, unless stated otherwise. Cite this article:
Chloroform Facts for Kids. Kiddle Encyclopedia.