Ballymoney (Irish: Baile Monaidh meaning 'townland of the moor') is a small town and civil parish in County Antrim, Northern Ireland. It is within the Causeway Coast and Glens Borough Council area. The civil parish of Ballymoney is situated in the historic baronies of Dunluce Upper and Kilconway in County Antrim, and the barony of North East Liberties of Coleraine in County Londonderry. It had a population of 10,402 people in the 2011 Census.

Ballymoney is located on the main road between Coleraine and Ballymena, with good road and rail connections to the main cities in Northern Ireland, Belfast and Derry.

The Ballymoney area has the highest life expectancy of any area in Northern Ireland, with the average male life expectancy at birth being 79.9 years and 83.8 years for females in years between 2010 and 2012. Conversely, it was revealed in 2013 that Ballymoney residents are more likely to die from heart disease than anywhere else in Northern Ireland. 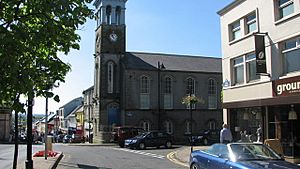 Ballymoney is one of the oldest towns in Ireland with many buildings of historic note in the town centre.

Maine Soft Drinks Ltd is based in the area.

Ballymoney Primary School, also known as Ballymoney Model, is situated at the top of the North Road and holds approximately 360 pupils each year. The school is within the Northern Eastern Education Library Board area.
The school is one of the largest within Ballymoney, housing eleven classrooms running from P1 to P7. It also has a large dinner hall, assembly hall, and a computer room. The school has a library and a classroom for special needs children.
Historically, Ballymoney Primary has been a predominately protestant school, but was scheduled to be integrated in September 2009 following a very narrow vote in favour of the idea.
Ballymoney Primary's principal is Mr. G. McVeigh, while the vice principal is Mrs. Herron. And a new 2013 principal Mrs. Jamison

Garryduff primary school is for pupils aged 4–11, it is located on the Garryduff road approximately 3 miles out of Ballymoney it has got a new extension with a new multi-purpose hall and a new classroom. The current principal is Miss Tannahill.

Landhead Primary School is a primary school for pupils aged 5 to 11 years, located on the Kilraughts Road, close to Ballymoney Rugby Club.
In 2004 the Sunday Mirror reported on the school's cat "Tigger". The cat has since featured on local news and radio programmes.

Leaney Primary School is located near Ballymoney High School, on Intermediate Road, approximately 1 mile from the town centre. The school for children aged 4 to 11, is a part of the Eco-Schools programme which aims to raise pupils awareness of sustainable development issues. The current principal is Miss V Moorhouse.

Lislagan Primary School is located about three miles from Ballymoney, in a rural location. It is a controlled school for girls and boys aged from 3 to 11. Enrollment has risen steadily over the last five years and currently stands at 94. It is within the North Eastern Education and Library Board area.

All content from Kiddle encyclopedia articles (including the article images and facts) can be freely used under Attribution-ShareAlike license, unless stated otherwise. Cite this article:
Ballymoney Facts for Kids. Kiddle Encyclopedia.