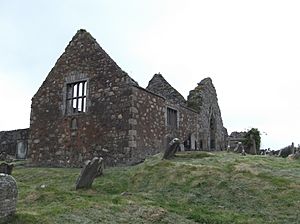 Bonamargy Friary is situated in County Antrim, Northern Ireland, off the Cushendall Road on the approach to Ballycastle. The name Bonamargy means ‘foot of the Margy River’, the river formed by the joining of the Cary River and Shesk Rivers.

It is a late Franciscan foundation established in 1485 by Rory MacQuillan. It is said that the first battle between the warring MacDonnell and MacQuillan clans was fought on nearby land. At the main entrance to the friary is a small, two storey gatehouse which opens into a store and workroom. Well worn steps lead directly to the dormitory above. Traces of an altar can still be found in the adjoining church, and the locked vaults hold the remains of the celebrated chieftain, Sorley Boy MacDonnell, and several of the Earls of Antrim. His grandson Randall, 1st Marquess of Antrim, noted for his role in the War of the Three Kingdoms, is also buried there.

Perhaps the friary's most famous resident was the 17th century prophet and recluse Julia MacQuillen. Known as "The Black Nun", MacQuillen wished to be buried at the entrance of the chapel so that she might be trodden under the feet of those who entered. A worn Celtic cross (rounded with a hole in the centre) marks her grave at the west end of the main church.

Around 1822 four manuscripts were found in an old oaken chest in the ruins of Bonamargy Friary. One of these manuscripts is described as "Saint Bonaventures Life of Christ" and/or "A History of the Blessed Scriptures". Another manuscript contained a large portion of one of the principal theological works of Saint Thomas Aquinas, written on vellum, in very contracted Latin and extending to about 600 quarto pages. The earliest date appearing on it is 1338 and the latest 1380. It originally belonged to the Monastery of Saint Anthony, of Amiens in France.

All content from Kiddle encyclopedia articles (including the article images and facts) can be freely used under Attribution-ShareAlike license, unless stated otherwise. Cite this article:
Bonamargy Friary Facts for Kids. Kiddle Encyclopedia.