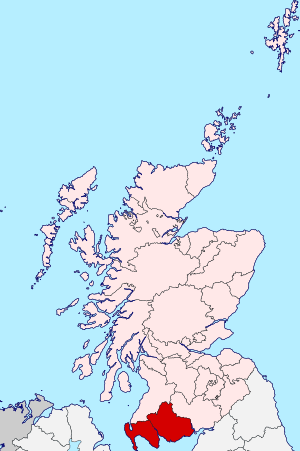 Galloway (Gaelic: Gall-Ghàidhealaibh; Latin: Gallovidia) is a region in southwestern Scotland comprising the former counties of Wigtownshire and Kirkcudbrightshire.

A native or inhabitant of Galloway is called a Gallovidian or a Galwegian. The place name Galloway is derived from the Gaelic i nGall Gaidhealaib ("amongst the Gall Gaidheil"). The Gall Gaidheil, literally meaning "Stranger-Gaidheil", originally referred to a population of mixed Scandinavian and Gaelic ethnicity that inhabited Galloway in the Middle Ages.

Galloway is bounded by sea to the west and south, the Galloway Hills to the north, and the River Nith to the east; the border between Kirkcudbright and Wigtown shires is marked by the River Cree. The definition has, however, fluctuated greatly in size over history.

A hardy breed of black, hornless cattle named Galloway cattle is native to the region, in addition to the more distinctive 'Belted Galloway' or 'Beltie'. 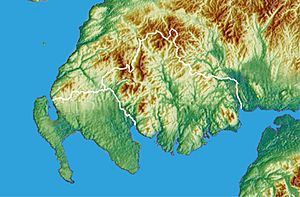 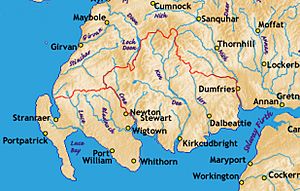 The main rivers and several towns

Galloway comprises that part of Scotland southwards from the Southern Upland watershed and westward from the River Nith. Traditionally it has been described as stretching from "the braes of Glenapp to the Nith". The valleys of three rivers, the Urr Water, the Water of Ken and River Dee, and the Cree, all running north-south, provide much of the good arable land, although there is also some arable land on the coast. Generally however the landscape is rugged and much of the soil is shallow. The generally south slope and southern coast make for mild and wet climate, and there is a great deal of good pasture.

The northern part of Galloway is exceedingly rugged and forms the largest remaining wilderness in Britain south of the Highlands. This area is known as the Galloway Hills.

Historically Galloway has been famous both for horses and for cattle rearing, and milk and beef production are both still major industries. There is also substantial timber production and some fisheries. The combination of hills and high rainfall make Galloway ideal for hydroelectric power production, and the Galloway Hydro Power scheme was begun in 1929. Since then, electricity generation has been a significant industry. More recently wind turbines have been installed at a number of locations on the watershed, and a large offshore wind-power plant is planned, increasing Galloway's 'green energy' production. 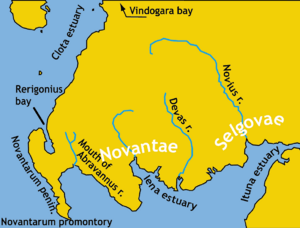 Landmarks according to Ptolemy. 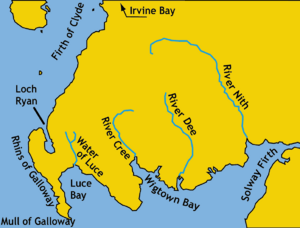 The 2nd century geographer Ptolemy produced a map of Britain in his Geography, in which he describes the landmarks and peoples of the island. The landmarks were identified long ago, and a number of them relate to Galloway:

In the west, the city of Rerigonium (literally 'very royal place'), shown on Ptolemy's map of the world, is a strong contender for the site of Pen Rhionydd, referred to in the Welsh Triads as one of the 'three thrones of Britain' associated with the legendary King Arthur, and may also have been the caput of the sub-Roman Brythonic kingdom of Rheged. Rerigonium's exact position is uncertain except that it was 'on Loch Ryan', close to modern day Stranraer; it is possible that it is the modern settlement of Dunragit (Dun Rheged). 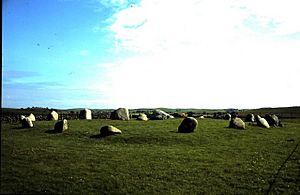 Torhousekie Stone Circle dating from 2nd millennium BC, is one of the best preserved sites in Britain. It is approx. 60ft in diameter. photo by Ronnie Leask 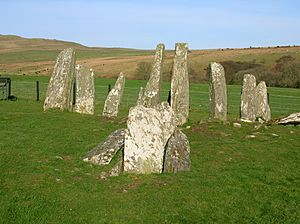 The Romans named the inhabitants of Galloway the Novantae. According to tradition, before the end of Roman rule in Britain, St. Ninian established a church or monastery at Whithorn, Wigtownshire, which remained an important place of pilgrimage until the Reformation. The county is rich in prehistoric monuments and relics, amongst the most notable of which are the Drumtroddan Standing Stones (and cup-and-ring carvings), the Torhousekie Stone Circle, both in Wigtownshire and Cairnholy (a Neolithic Chambered Cairn). There is also evidence of one of the earliest pit-fall traps in Europe which was discovered near Glenluce, Wigtownshire. 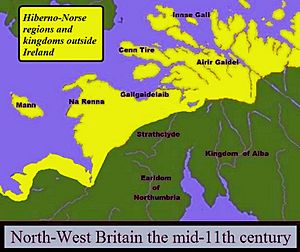 Galloway probably remained a Brythonic dominated region until the late 7th century when it was taken over by the English kingdom of Bernicia.

English dominance was supplanted by Norse-Gaelic (Gall-Ghàidheal) peoples between the 9th and the 11th century. This can be seen in the context of widespread Norse domination of the Irish Sea, including extensive settlement in the Isle of Man and in the now English region of Cumbria immediately south of Galloway.

If it had not been for Fergus of Galloway who established himself in Galloway, the region would rapidly have been absorbed by Scotland. This did not happen because Fergus, his sons, grandsons and great-grandson Alan, Lord of Galloway shifted their allegiance between Scottish and English kings. During a period of Scottish allegiance a Galloway contingent followed David, King of Scots in his invasion of England and led the attack in his defeat at the Battle of the Standard (1138).

Alan died in 1234. He had three daughters and an illegitimate son Thomas. The 'Community of Galloway' wanted Thomas as their 'king'. Alexander III of Scotland supported the daughters (or rather their husbands) and invaded Galloway. The Community of Galloway was defeated, and Galloway divided up between Alan's daughters, thus bringing Galloway's independent existence to an end.

Alan's eldest daughter, Derbhorgail (Latinized as Dervorguilla), married John de Balliol, and their son (also John) became one of the candidates for the Scottish Crown. Consequently, Scotland's Wars of Independence were disproportionately fought in Galloway.

There were a large number of new Gaelic placenames being coined post 1320 (e.g. Balmaclellan), because Galloway retained a substantial Gaelic speaking population for several centuries more. Following the Wars of Independence, Galloway became the fief of Archibald the Grim, Earl of Douglas and his heirs. Whithorn remained an important cultural centre, and all the medieval Kings of Scots made pilgrimages there.

Galwegian Gaelic seems to have lasted longer than Gaelic in other parts of Lowland Scotland, and Margaret McMurray (d. 1760) of Carrick (outside modern Galloway) appears to have been the last recorded speaker.

In the years after the Union of the Crowns in 1603, Galloway underwent radical change, during the War of the Three Kingdoms and Covenanter rebellion.

In modern times, Stranraer was a major ferry port, but the company have now moved to Cairnryan.

Galloway has been the setting of a number of novels, including Walter Scott's Guy Mannering. Other novels include the historical fiction trilogy by Liz Curtis Higgs, Thorn in My Heart, Fair is the Rose, and Whence Came a Prince. Richard Hannay flees London to lie low in Galloway in John Buchan's novel The Thirty-nine Steps. Five Red Herrings, a whodunit by Dorothy L. Sayers, initially published in the US as Suspicious Characters, sees Lord Peter Wimsey, on holiday in Kirkcudbright, investigating the death of an artist living at Gatehouse of Fleet; the book contains some remarkable descriptions of the countryside. S R Crockett, a bestselling writer of historical romances active before the First World War, set several novels in the region including "The Raiders" and "Silver Sand".

All content from Kiddle encyclopedia articles (including the article images and facts) can be freely used under Attribution-ShareAlike license, unless stated otherwise. Cite this article:
Galloway Facts for Kids. Kiddle Encyclopedia.