The Belted Galloway is a traditional Scottish breed of beef cattle. It derives from the Galloway cattle of the Galloway region of south-western Scotland, and was established as a separate breed in 1921. It is adapted to living on the poor upland pastures and windswept moorlands of the region. The exact origin of the breed is unclear, although the white belt for which they are named – and which distinguishes the breed from the native black Galloway cattle – is often surmised to be the result of cross-breeding with the similarly-coloured Dutch Lakenvelder breed.

Belted Galloways are primarily raised for their quality marbled beef, although they are sometimes milked or kept for ornament.

The Belted Galloway derives from the traditional Galloway cattle of the Galloway region of south-western Scotland, which in turn form part of a broader group of traditional Scottish cattle including the Aberdeen Angus and Highland breeds. Galloways are most often black, but other colours occur; the white-belted or white-middled Galloway was one of them. The origin of the white belt is unknown; it is thought to have resulted from some cross-breeding with Dutch Lakenvelder cattle in the seventeenth century.

From 1852, both Aberdeen Angus and Galloways could be registered in a herd-book for polled cattle. A separate Galloway herd-book was established in 1878. In 1921 a group of breeders set up the Dun and Belted Galloway Association, which – as the name suggests – registered both belted and dun-coloured Galloways; its first herd-book was published in 1922. In 1951 registration of dun cattle was discontinued, and the society changed its name to the Belted Galloway Society.

In the twentieth century, Belted Galloways were exported to many countries including Australia, Brazil, Canada, France, Germany, Holland, New Zealand and the United States. Breed societies were started in New Zealand in 1948, in the US in 1951, and in Australia in 1975.

Like other breeds, the Belted Galloway suffered heavily during the epidemic of foot-and-mouth disease in the British Isles in 2001, and a substantial part of the total population was lost. By 2007 numbers had recovered to the point where it could be removed from the endangered native breed watchlist of the Rare Breeds Survival Trust; in the same year the global breed population was listed by the FAO as "not at risk". In 2012 there were approximately 3500 registered breeding cows in the United Kingdom.

It is listed by the American Livestock Breeds Conservancy as a "recovering" breed, which means there are more than 2,500 annual registrations in the United States and a global population greater than 10,000, but they were once on the "watch" list. About 18,390 cattle were registered in the US in 2015. 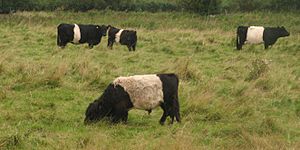 Galloway cattle are naturally polled (without horns). The most visible characteristics are its long hair coat and the broad white belt that completely encircles its body. Its coarse outer coat helps shed the rain, and its soft undercoat provides insulation and waterproofing, enabling the breed to spend winter outside. Black Belteds are the most prominent, but Dun and Red Belteds are also recognised by breed societies, the latter being comparatively rare and sought after. A female Belted Galloway cannot be registered in the Herd Book if it has white above the dewclaw other than the belt, but can be registered in the Appendix. A bull can only be registered in the Herd Book if it has no other white than the belt.

The dun colour is caused by a mutation in the PMEL gene, the same mutation that causes dun and silver dun in Highland cattle. The black and red coat colours are caused by the same alleles of the MC1R gene, ED for black and e/e for red, as in most other breeds of cattle.

They are well-suited for rough grazing land and will use coarse grasses other breeds would shun. They are able to maintain a good condition on less than ideal pasture, and produce high-quality beef on grass alone. They have on occasions attacked people.

The Belted Galloway is reared mainly for beef; it may also be used for vegetation management. An old strain is listed as the "Original Belted Galloway Cattle" in the Ark of Taste of the Slow Food Foundation for Biodiversity.

All content from Kiddle encyclopedia articles (including the article images and facts) can be freely used under Attribution-ShareAlike license, unless stated otherwise. Cite this article:
Belted Galloway Facts for Kids. Kiddle Encyclopedia.