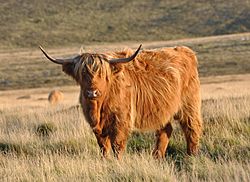 A Highland cow on Dartmoor in England 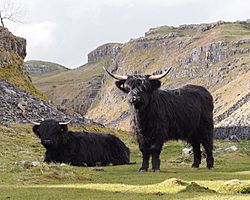 Highland cows with a black coat

The Highland cattle (Scottish Gaelic: Bò Ghàidhealach; Scots: Heilan coo) is a Scottish cattle breed. They have long horns and long, wavy, woolly coats. The long oily outer hair covers a downy undercoat. This makes them well suited to conditions in the Highlands, which have a high annual rainfall and sometimes very strong winds.

Highlands are raised primarily for their meat. They originated in the Scottish Highlands and the Outer Hebrides. They were first mentioned in the 6th century AD. They have since been exported worldwide.

They are a hardy breed. Their long hair gives them the ability to overwinter in the valleys. Bulls can weigh up to 800 kilograms (1,800 pounds) and cows can up to 500 kilograms (1,100 pounds). Their milk generally has a high butterfat content. Their meat, which is of the highest quality, is lower in cholesterol than other varieties of beef.

All content from Kiddle encyclopedia articles (including the article images and facts) can be freely used under Attribution-ShareAlike license, unless stated otherwise. Cite this article:
Highland cattle Facts for Kids. Kiddle Encyclopedia.