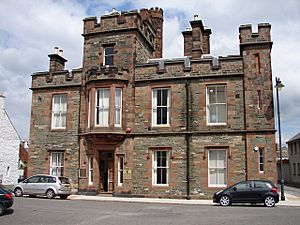 In 1453, Kirkcudbright became a Royal burgh , and about a century later the magistrates of the town obtained permission from Queen Mary to use part of the convent and nunnery as a parish church. From around 1570, Sir Thomas Maclellan of Bombie, the chief magistrate, received a charter for the site, its grounds, and gardens. Maclellan dismantled the church in order to obtain material for his proposed castle and proceeded to have a very fine house, MacLellan's Castle, built on the site.

After defeat at the Battle of Towton, Henry VI of England crossed the Solway in August 1461 to land at Kirkcudbright in support of Queen Margaret at Linlithgow. The town successfully withstood a siege in 1547 from the English commander Sir Thomas Carleton, but after the surrounding countryside had been overrun - was compelled to surrender. 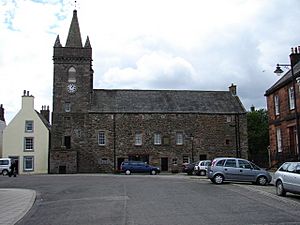 The Tolbooth was built between 1625 and 1629 and served not only as the tollbooth, but also the council offices, the Burgh and Sheriff courts, the criminal prison, and the debtors' prison. One of its most famous prisoners was John Paul Jones, hero of the American navy, who was born in nearby Kirkbean. The Tolbooth building is now used as an Arts Centre.

The Kirkcudbright Railway opened in 1864, but the railway line and station closed in 1965. 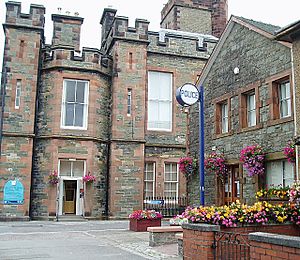 The Stewartry Museum was founded in 1879 and was at first based in the Town Hall until it became too small. The collection moved to a purpose-built site and contains the local and natural history of the eastern part of Galloway, formerly known as Kirkcudbrightshire and now known as the Stewartry.

Britain's earliest surviving sporting trophy, the Siller Gun , is part of the collection, as are paintings by many local artists.

All content from Kiddle encyclopedia articles (including the article images and facts) can be freely used under Attribution-ShareAlike license, unless stated otherwise. Cite this article:
Kirkcudbright Facts for Kids. Kiddle Encyclopedia.