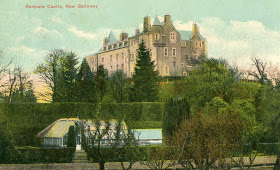 Kenmure Castle in the 19th century

Kenmure Castle is a fortified house or castle in The Glenkens, 1 mile (1.6 km) south of the town of New Galloway in Kirkcudbrightshire, Galloway, south-west Scotland. The site was occupied from the Middle Ages, and the house incorporates part of a 17th-century castle. This was remodelled in the 19th century, but the house has been derelict since the mid-20th century. It was the seat of the Gordon family of Lochinvar, later raised to the peerage as Viscounts of Kenmure. The ruin is a scheduled monument.

The present castle stands on a partly natural mound, which may have been modified for defence in the early Middle Ages. The Lords of Galloway, rulers of a semi-independent kingdom in south-west Scotland until the 13th century, may have had a fortress here. Kenmure has been suggested as a possible birthplace in 1249 of John Balliol, later King of Scotland, whose mother Dervorguilla was daughter of Alan, the last independent Lord of Galloway. It later belonged to the Douglas and Maxwell families. 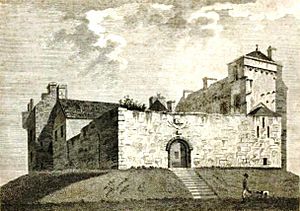 Kenmure became a property of the Gordon family from 1297, when they arrived from Berwickshire. The Gordons also built a castle on an island in Lochinvar, some 6 miles (9.7 km) to the north. James IV of Scotland came to Kenmure in March 1508 following a pilgrimage to Whithorn. The king played "tables", a form of backgammon, when he stayed and gave money to the laird's servants.

The early castle at Kenmure belonging to Sir John Gordon of Lochinvar, was destroyed or damaged by opponents of Mary, Queen of Scots, who marched through the south-west after they defeated her supporters at the Battle of Langside (1568). An inventory was made of all the furnishings in Kenmure Castle on 3 December 1604. 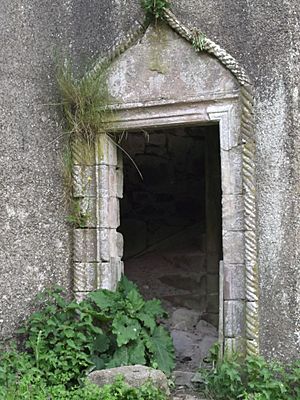 One of the castle doorways, showing distinctive 'rope' ornamentation.

Sir Robert Gordon of Lochinvar was created a baronet in 1626, and in 1633 his son Sir John Gordon was created Viscount of Kenmure by Charles I in 1633. The core of the present building is the castle which was largely erected in the 17th century, though possibly including earlier building work. The castle was laid out on the west and south sides of a courtyard, with the north and east sides formed by a high wall. The entrance gate in the north wall was flanked by towers at the two northern corners. The 6th Viscount took part in the Jacobite Rising of 1715 and was subsequently executed and his estates forfeit. Some accounts state that his body was returned to his family at Kenmure for burial. 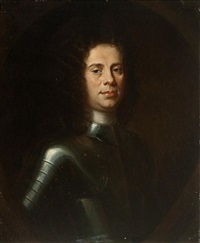 By 1790 Kenmure Castle was described as a ruin. 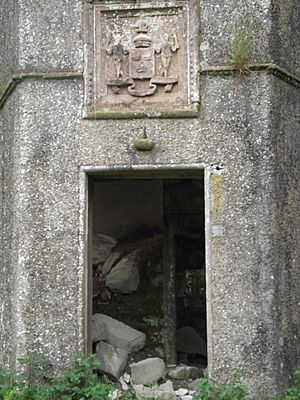 Main doorway, with heraldic panel above displaying the arms of the Gordon family.

The viscountcy was restored to Captain John Gordon in 1824 and who died in 1840, though it has been dormant since the death of his nephew, Adam the 8th/11th Viscount, in 1847. The castle was extensively remodelled and modernised during the 19th century, when the courtyard wall and the north-east tower were removed with the use of gunpowder. The south range was rebuilt in around 1840, Amongst the architects responsible for these changes were William McCandlish, in the 1840s, and Hugh Maclure in the 1860s. In 1879 the Sheffield-based architect Matthew Ellison Hadfield was employed to remodel the west range. Further extensions were made in 1908 by the architect Christian Elliot. In 1923, the estate was sold but the castle itself was let to and later bought by Brigadier-General Maurice Lilburn MacEwen CB, late 16th The Queen's Lancers. He was battalion commander of the Stewartry Home Guard. He died in 1943 at Kenmure Castle and is buried in Kells Churchyard. From about the late 1940s to 1957 it operated as an hotel run by Stanley Dobson, (brother of David Cowan Dobson),and his business partner Hugh Ormond Sparks. Around 1958 the building's interior fixtures and fittings were stripped out and the roof removed. The ruins were bought in 1962 by Graeme Gordon. The castle was not as commonly believed destroyed by fire. The remains of the castle were listed in 1971, and the site was scheduled in 1998. The castle is said to be haunted by a headless piper, "The Headless Piper of Kenmure".

Kenmure Castle in the 21st century

A sundial bearing the date 1623 from Kenmure is now in Dumfries Museum.

All content from Kiddle encyclopedia articles (including the article images and facts) can be freely used under Attribution-ShareAlike license, unless stated otherwise. Cite this article:
Kenmure Castle Facts for Kids. Kiddle Encyclopedia.