"Rough Island" is also used as a translation of "Garbh Eilean", a common Scottish name for islands 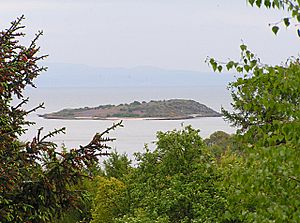 Since 1937 the isle of Rough has been in the ownership of the National Trust for Scotland. The island is now a bird sanctuary.

Accessible across the causeway from Kippford when the tides allow or across the mudflats from Rockcliffe, the isle of Rough can be walked to from the Scottish mainland. As the island is a bird sanctuary visitors should avoid travelling to the island during the months of May and June to avoid disturbing the nesting oystercatchers and ringed plovers. The islands' causeway is flooded and underwater for 5 (five) hours during high tide and visitors to the island need to take this into account when travelling there.

All content from Kiddle encyclopedia articles (including the article images and facts) can be freely used under Attribution-ShareAlike license, unless stated otherwise. Cite this article:
Rough Island, Scotland Facts for Kids. Kiddle Encyclopedia.