Kids Encyclopedia Facts
This page is about the body of water. For the song, see Solway Firth (song) . 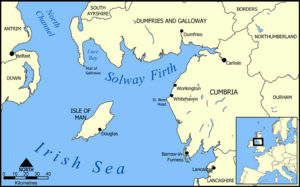 Map of the Solway Firth. 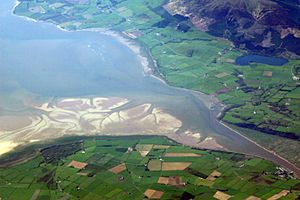 The estuary of the River Nith, opening into the Solway Firth south of Dumfries.

The Solway Firth (Scottish Gaelic: Tràchd Romhra) is a firth on the west coast of Great Britain, in the Irish Sea, near the Isle of Man. It forms part of the Anglo-Scottish border, lying north of Cumbria (including the Solway Plain) and south of Dumfries and Galloway. East to west, it stretches from St Bees Head (just south of Whitehaven in Cumbria) to the Mull of Galloway (in the westernmost part of Dumfries and Galloway).

The firth’s coastline is characterised by lowland hills and small mountains. It is a mainly rural area: Fishing, hill farming, and some arable farming play a large part in the local economy, although tourism is increasing.

The coast of the Solway Firth, known as the Solway Coast, was designated an “Area of Outstanding Natural Beauty” in 1964. Construction of the Robin Rigg Wind Farm in the firth began in 2007.

Within the firth, there are some salt flats and mud flats that can be dangerous, due to their frequently shifting patches of quicksand.

There are over 290 square kilometres (110 sq mi) of Sites of Special Scientific Interest (SSSIs) in the area of the firth (one of which is Salta Moss), as well as national nature reserves — at Caerlaverock and in Cumbria. On the Cumbrian side, much of the coastline has been designated an “Area of Outstanding Natural Beauty.” The Solway Coast’s AONB has two separate sections: The first runs westward from just north of Carlisle to Skinburness; the second runs south from the hamlet of Beckfoot, past Mawbray and Allonby, to Crosscanonby.

In 2013, the honeycomb worm and blue mussel were designated as targets of conservation efforts, and Allonby Bay (an inlet of the Solway Firth) was put forward as a candidate for a Marine Conservation Zone.

A 53-mile (85 km) long-distance walking route, the Annandale Way, runs through Annandale, from the source of the River Annan, in the Moffat Hills, to the Solway Firth; it was opened in September 2009.

Islands in the Solway

Unlike other parts of the west coast of Scotland, the Solway Firth has only a few islands. They are:

Below are links to lists of the other rivers that flow into the firth: 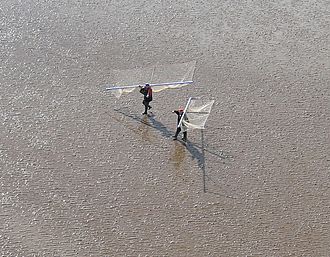 The name 'Solway' (recorded as Sulewad in 1218) is of Scandinavian origin, and was originally the name of a ford across the mud flats at Eskmouth. The first element of the name is probably from the Old Norse word súl 'pillar', referring to the Lochmaben Stane, though it may instead be from súla, meaning 'solan goose'. Súl and súla both have long vowels, but the early spellings of Solway indicate a short vowel in the first element. This may be due to the shortening of an originally long vowel in the Middle English period but may also represent an original short vowel. If this is the case, the first element may be *sulr, an unrecorded word cognate with Old English sol 'muddy, pool', or a derivative of sulla, meaning 'to swill'.

The second element of the name is from the Old Norse vað, meaning 'ford' (which is cognate with the modern English word wade).

The area had three fords: the Annan or Bowness Wath, the Dornock Wath (once called the Sandywathe), and the main one —the Solewath (also called the Solewath or the Sulewad).

A wooden lighthouse was built in 1841 at Barnkirk Point . It was destroyed by fire in 1960.

On 9 March 1876, a 79-ton French Lugger, the “St. Pierre”, was stranded - and finally declared lost - on Blackshaw Bank, an ill-defined feature which extends for a considerable distance on both sides of the channel of the River Nith.

Between 1869 and 1921, the estuary was crossed by the Solway Junction Railway on a 1780 m (5850 ft) iron viaduct. The line was built to carry iron ore from the Whitehaven area to Lanarkshire and was financed and operated by the Caledonian Railway of Scotland. After the railway, which was not a financial success, ceased operating in 1921, the railway bridge became a popular footpath, enabling residents of Scotland to easily cross into England, where alcoholic drink was legally available seven days a week. (Scotland was dry on Sundays at the time.) The viaduct was demolished between 1931 and 1933.

The Ministry of Defence had by 1999 fired more than 6,350 depleted uranium rounds into the Solway Firth from its testing range at Dundrennan Range.

All content from Kiddle encyclopedia articles (including the article images and facts) can be freely used under Attribution-ShareAlike license, unless stated otherwise. Cite this article:
Solway Firth Facts for Kids. Kiddle Encyclopedia.