Firth is a word in the English and Scots languages used to denote various coastal waters in the United Kingdom, predominantly within Scotland. In the Northern Isles, it more usually refers to a smaller inlet. It is linguistically cognate to fjord (both from Proto-Germanic *ferþuz) which has a more constrained sense in English. Bodies of water named "firths" tend to be more common on the Scottish east coast, or in the southwest of the country, although the Firth of Lorn is an exception to this. The Highland coast contains numerous estuaries, straits, and inlets of a similar kind, but not called "firth" (e.g. the Minch and Loch Torridon); instead, these are often called sea lochs. Before about 1850, the spelling "Frith" was more common.

A firth is generally the result of ice age glaciation and is very often associated with a large river, where erosion caused by the tidal effects of incoming sea water passing upriver has widened the riverbed into an estuary. Demarcation can be rather vague. The Firth of Clyde is sometimes thought to include the estuary as far upriver as Dumbarton, but the Ordnance Survey map shows the change from river to firth occurring off Port Glasgow. In navigation terms, the dredged River Clyde Channel for shipping meets the Firth of Clyde Channel at the Tail of the Bank, where the river crosses a sandbar off Greenock as the estuary widens at the junction to the Gare Loch. Locally, the river can be described as extending even further west to Gourock point.

However, some firths are exceptions. The Cromarty Firth on the east coast of Scotland, for example, resembles a large loch with only a relatively small outlet to the sea and the Solway Firth and the Moray Firth are more like extremely large bays. The Pentland Firth is a strait rather than a bay or an inlet.

Firths on the west coast of Scotland (from north to south) 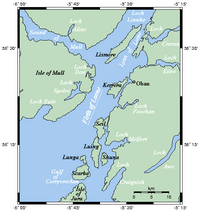 The Firth of Lorn and other nearby waterways

The estuary of the River Nith, opening into Solway Firth south of Dumfries.

Firths on the east coast of Scotland (from north to south)

Entrance to the Cromarty Firth, with oil rigs behind 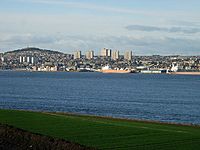 Dundee from the Fife shore of the Firth of Tay

These are connected to, or form part of, the North Sea.

Firths on the north coast of Scotland 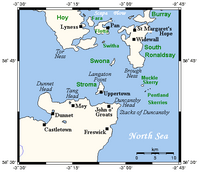 Map of the Pentland Firth and associated lands

Firths in the Northern Isles 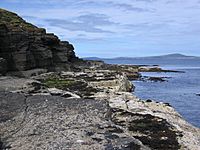 Cliffs in Saviskaill Bay on Rousay, looking northward to Westray across Westray Firth

The Northern Isles were part of Norway until the 15th century, and retain many Norse names. In Shetland in particular, "firth" can refer to smaller inlets, although geo, voe and wick are as common. In Orkney, "wick" is common.

Other similar waters in Scotland

In the Scottish Gaelic language, linne is used to refer to most of the firths above; it is also applied to the Sound of Sleat, Crowlin Sound, Cuillin Sound, Sound of Jura, Sound of Raasay, and part of Loch Linnhe.

The following is a selection of other bodies of water in Scotland which are similar to various firths, but which are not termed such –

Likewise, in the Northern Isles, the words "firth" and "sound" are often used arbitrarily or interchangeably. Bluemull Sound for example, is very similar to some of the firths in the Shetland Islands. 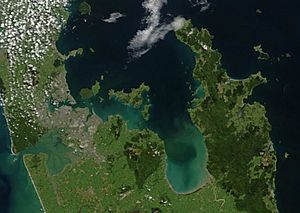 The Firth of Thames is the large bay to the southeast

All content from Kiddle encyclopedia articles (including the article images and facts) can be freely used under Attribution-ShareAlike license, unless stated otherwise. Cite this article:
Firth Facts for Kids. Kiddle Encyclopedia.