Nairn ( NAIRN; Scottish Gaelic: Inbhir Narann) is a town and former burgh in the Highland council area of Scotland. It is an ancient fishing port and market town around 17 miles (27 km) east of Inverness. It is the traditional county town of Nairnshire.

As of the 2011 Census, Nairn had a population of 9,773, making it the third-largest settlement in the Highland council area, behind Inverness and Fort William. Nairn is best known as a seaside resort, with two golf courses, award-winning beaches, a community centre/mid-scale arts venue (Nairn Community & Arts Centre), a small theatre (called The Little Theatre) and one small museum, providing information on the local area and incorporating the collection of the former Fishertown museum. 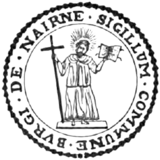 Seal of the Burgh of Nairn, depicting Saint Ninian (from a 1906 book)

King James VI of Scotland visited the town in 1589 and is said to have later remarked that the High Street was so long that the people at either end spoke different languages, Scots and Gaelic. The landward farmers and the fishing families at the harbour end spoke Doric, and the highlanders spoke Gaelic. Nairn, formerly split into Scottish Gaelic- and Scots-speaking communities, was a town of two halves in other ways. The narrow-streeted fishertown surrounds a harbour built by Thomas Telford while Victorian villas stand in the 'West End'. It is believed that the Duke of Cumberland stayed in Nairn the night before the battle of Culloden.

In 1645, during the Wars of the Three Kingdoms, the battle of Auldearn was fought near the town, between Royalists and Covenanters.

It was not until the 1860s that Nairn became a respectable and popular holiday town. Dr John Grigor (a statue of whom is located at Viewfield) was gifted a house in this coastal town and spent his retirement there. He valued its warm climate and advised his wealthy clients to holiday there. Following the opening of the Nairn railway station in 1855, new houses and hotels were built in the elegant West End. The station is on the Aberdeen to Inverness Line. Originally this was the last stop on the line from London due to the inhospitable terrain on what is now the main Dava branch line to Inverness.

Nairn has an expanse of sand beaches that were used extensively in training exercises for the Normandy landings during World War II. The beaches around Nairn had landmines planted, during clearance operations in 1945 by 11th Company, Bomb Disposal, Royal Engineers. High pressure water jetting was used to displace shingle on top of mines to make clearance easier. Notably during this period two German spies who had been dropped by U-boat in the Moray Firth were arrested at Nairn railway station attempting to board a train to Inverness.

The burgh of Nairn was a parliamentary burgh, combined with the burghs of Inverness, Fortrose and Forres, in the Inverness Burghs constituency of the House of Commons of the Parliament of the United Kingdom from 1708 to 1918. The constituency was abolished in 1918 and the Forres and Nairn components were merged into the then new constituency of Moray and Nairn.

Nairn is currently represented by Scottish National Party MP Drew Hendry in the House of Commons of the United Kingdom.

The Old Parish Church, commonly known as Nairn Old Parish Church is on Academy Street in Nairn. It is still in use as a Church of Scotland church. St Columba's Episcopal Church is on Queen Street; the church was built of sandstone with a slate roof in 1857 and is still in use. There is also St. Mary's Roman Catholic Church in Academy Street, founded as a result of Gaelic-speaking Roman Catholics who moved from the island of Barra to Nairn in the second half of the 19th. century.

Nairn is known as a golfing destination, with two 18 hole Championship golf courses. One of these, The Nairn Golf Club was established in 1887. Its designers include Archie Simpson, Old Tom Morris and James Braid. It has hosted many tournaments culminating in the 1999 Walker Cup and was the venue for the 2012 Curtis Cup. The second is Nairn Dunbar Golf Club.

The local football team is Nairn County F.C., who play in the Highland Football League who won the Highland League Championship in Season 1975/76. After a long lean spell of 31 years in 2006 they won the North of Scotland Cup 3-1 against local rivals Forres Mechanics F.C. at Grant Street Park, Inverness and they won again against Wick Academy F.C. in 2012. The town has another football team, Nairn St. Ninian F.C., who are members of the Scottish Junior Football Association and are based at Showfield Park.

Nairn hosts the only Synchronised Swimming (Artistic Swimming) club in the north of Scotland.

The town also hosts the Nairn International Jazz Festival each August, usually attracting some well-known and world class musicians. In 2007 Oscar-winning actress Tilda Swinton, who lives in Nairn, created a film festival entitled "Ballerina Ballroom Cinema of Dreams", which was held in the Nairn Public Hall. It generated worldwide press about the festival and Nairn.

Nairn is also the host for the annual Nairn Book & Arts festival which takes place every year in September at the Nairn Community & Arts Centre.

Nairn is home to the Little Theatre, run by the Nairn Drama Club, which was established in 1946. Each year the club produces a number of shows, of varying genres, with the annual Christmas panto being the largest production of all. The Theatre began in dilapidated premises but was rebuilt and reopened in 2004.

Nairn stages one of the biggest Highland games in the North. The first event was held in 1867, and it is now one of the few where entry remains free. The games are a major event in the local social calendar.

Like the rest of the British Isles, Nairn experiences a maritime climate with cool summers and mild winters. It is one of the driest locations in Scotland due to the rain shadowing effect of the surrounding mountains.

All content from Kiddle encyclopedia articles (including the article images and facts) can be freely used under Attribution-ShareAlike license, unless stated otherwise. Cite this article:
Nairn Facts for Kids. Kiddle Encyclopedia.