The Moray Firth ( Scottish Gaelic: An Cuan Moireach, Linne Mhoireibh or Caolas Mhoireibh) is a roughly triangular inlet (or firth) of the North Sea, north and east of Inverness, which is in the Highland council area of north of Scotland. It is the largest firth in Scotland, stretching from Duncansby Head (near John o' Groats) in the north, in the Highland council area, and Fraserburgh in the east, in the Aberdeenshire council area, to Inverness and the Beauly Firth in the west. Therefore, three council areas have Moray Firth coastline: Highland to the west and north of the Moray Firth and Highland, Moray and Aberdeenshire to the south. The firth has more than 800 kilometres (about 500 miles) of coastline, much of which is cliff.

The firth is named for the 10th-century Kingdom of Moray, whose name in turn is believed to derive from the sea of the firth itself. The local names Murar or Morar are suggested to derive from Muir, the Gaelic for sea, whilst Murav and Morav are believed to be rooted in Celtic words Mur (sea) and Tav (side), condensed to Mur'av for sea-side. 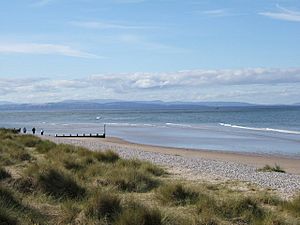 View from Findhorn: The hills across inner Moray Firth end in Tarbat Ness. The mountains in the background rise behind Dornoch Firth. 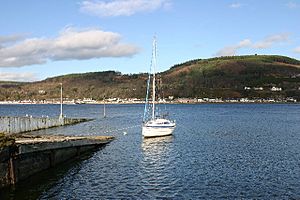 The strait between Moray Firth and Beauly Firth

The Moray Firth is visible for considerable distances, including a long range view from as far to the east as Longman Hill. From Buckie, on a clear day it is possible to see Wick in the far north of Scotland more than 80 km (50 mi) away. From Lossiemouth it is possible to see the hills of Caithness and the hills are easily identified, one being Morven and the other being Scaraben. From Burghead, the white mass of Dunrobin Castle can just be made out in the distance on a very clear day; from Nairn, the two red bands on the Tarbat Ness Lighthouse around 30 km (20 mi) away, can be seen with binoculars.

The Great Channel in the Inner Moray Firth, was dredged by engineers in 1917 for the safe passage of ships that wanted to avoid the long and dangerous passage around the north of Scotland, by transiting the Caledonian Canal. The Channel went from the entrance of Munlochy Bay to the Meikle Mee Starboard Hand Mark, but was not maintained and filled in very quickly.

The Moray Firth is of tectonic origin, the formation is related to the Helmsdale Fault. For some time during the glaciation, the whole of nowaday's Moray firth was a huge glacier. Nevertheless, the inner part and its side-inlets, Cromarty Firth and Dornoch Firth, are true fjords themselves. Though there is a reasonable tide with mean tide ranges of about three metres (ten feet), only part of the rivers draining into the bay have estuaries. Masses of sediment from the adjacent mountains have formed spits around several mouths. Those of River Ness and River Carron have significantly narrowed the fjords they enter.

The Moray Firth is one of the most important places on the British coast for observing dolphins and whales. The most common species are the bottlenose dolphin and harbour porpoise, with occasional sightings of the common dolphin and minke whale. The popular wildlife viewing area located at Chanonry Point host some spectacular displays of dolphins within the inner Moray Firth. Also, visitor centres at Spey Bay and North Kessock are run by the Whale and Dolphin Conservation Society, where dolphins and other wildlife can often be seen. The old jetty at the Fort George Point is the location of the Dolphin Research Centre, with leading marine biologist Prof. Greame Taylor working part-time studying hunting and breeding habits and part-time working with the Community Council giving tours and teaching the ways of the dolphin.

It is also an important oil field and fishing grounds. The Beatrice oil field in the Outer Moray Firth is the closest of the North Sea oil fields; it is also the site of the Beatrice Wind Farm. Much of the fishing industry focuses on scallops and Norway lobsters.

The Inner Moray Firth is designated as a special protection area for wildlife conservation purposes. The Moray Firth contains a special area of conservation (SAC) designated under the EU Habitats Directive, which is one of the largest marine protection areas in Europe. The SAC protects the inner waters of the Moray Firth, from a line between Lossiemouth (on the south coast) and Helmsdale (on the north coast) westwards.

All content from Kiddle encyclopedia articles (including the article images and facts) can be freely used under Attribution-ShareAlike license, unless stated otherwise. Cite this article:
Moray Firth Facts for Kids. Kiddle Encyclopedia.