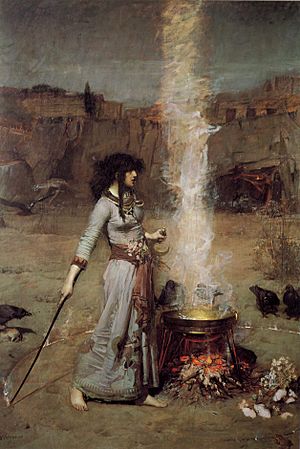 Witchcraft is the use of magical powers. This might be for healing, for seeing into the future, for causing harm, or for religion. A person practicing witchcraft is called a witch, although a man practicing witchcraft is often called a wizard (derived from a mostly Northern Europe Druidic & Germanic system), a warlock (a term made up by Hollywood scriptwriters for the 1960's TV show Bewitched), or a sorcerer. Such people are said to have a knowledge of the pharmaceutical effects of certain herbs or shrubs. They then use this knowledge to help people who are sick.

People have believed in magic since the earliest human cultures, and many still do today. In Ancient times, those with magical powers were often considered witches or sorcerers. There are many examples of witches in Greek mythology, such as Circe, who was a sorcerer in Homer's Odyssey. Circe used potions to put spells on visitors to her house, and she could turn people into pigs.

In Medieval times, witchcraft gradually became an enemy of Christianity. The Catholic Church thought that witchcraft was the work of the devil.

In Europe in the Late Medieval/Early Modern period, Catholics, Protestants, and state leaders became very afraid of the power of witches. There were large witch-hunts in many places. People commonly believed that the devil was using witches to try to overthrow Christianity, so tens or hundreds of thousands of people were killed, and others were put in prison, tortured, and had lands and possessions taken away from them. Most of these witches were women, because people believed women were more likely to be witches. Witch-trials looked for evidence to prove that a person was a witch, and one way to test this was 'swimming a witch'. This meant they would throw them in a river with their hands tied up, and if they sunk, they were innocent. If they floated, they were guilty of witchcraft and were hanged.

In the early 20th century, a system of beliefs, or a creed, was developed. This creed is called Wicca.

All content from Kiddle encyclopedia articles (including the article images and facts) can be freely used under Attribution-ShareAlike license, unless stated otherwise. Cite this article:
Witchcraft Facts for Kids. Kiddle Encyclopedia.