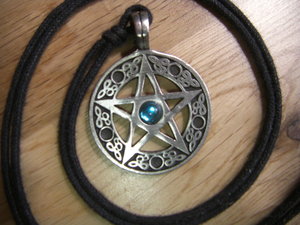 A pentacle, a symbol of faith used by many Wiccans

Wicca, or the Craft, is a Neo-pagan (meaning "new pagan") religion popularized by a British man named Gerald Gardner in the 1940s. Gardner called Wicca the "witch cult" and "witchcraft" and its followers the "Wica". The word "Wicca" means "Witch" in Old English. People who follow Wicca are called "Wiccans."

There are many different traditions of Wicca, yet many are common beliefs shared by all Wiccans, such as the afterlife, magic and morality.

Many Wiccans have special places at home where they perform rituals, magic, and worship. These places are called altars. Wiccans put holy and special objects on their altars, such as the following items:

Some Wiccans put other objects on their altars, such as statues Gods or Goddesses, a bell, candles, incense, and a broom (called a besom), used to "sweep" away negative energy or spirits.

The most important Wiccan teaching is called the Wiccan Rede. The word Rede means "advice" or "council" in Old German. "An harm ye none, do what ye will" is the very basic Wiccan Rede, which means, "Do what you want to do, but do not harm anything in the process." This means you must think about how your actions will affect yourself, other people, and the world. Many Wiccans believe that their actions have effects that come back three times as powerful. This is called the Rule of Threefold Return or "Rule of Three". This rule has different meanings depending on who you ask:

The Wheel of the Year

Wiccans have eight Sabbats, or 'Holy Days', which are:

In Wicca, a private book containing spells, rituals, potions, and occult knowledge, called a Book of Shadows, is kept. In some types of Wicca, such as Gardnerian Wiccan, the contents of the Book are kept secret from anyone but other members of the group, or coven. However, some versions of the Book have been published. Some parts of these published versions, such as the "Wiccan Rede" and the "Charge of the Goddess" have been used by non-Wiccans or eclectic Wiccans. Many eclectics create their own personal books, and keep them to themselves.

Wicca music or Wicca rock is music influenced by the Wicca religion and its beliefs relating to nature and conservation.

An early band called Themis Themis toured Canada and the USA singing and talking about Wicca. The Themis body of works promotes things that are Wiccan such as the divinity of nature; the Lord and Lady (dual deity aspect of Wicca) and an ethical credo that resembles Wiccan philosophies.

Another Canadian band, a group of vocalists from Vancouver Canada, the Chalice and Blade, also perform original pieces based on the beliefs of Wicca and "sing songs which show (their) reverence for the earth and the balance of the God and Goddess".

According to The Religion Newswriters Foundation "Wicca is moving into the mainstream" smashing stereotypes as their movement matures. Throughout America, Wiccans are organizing congregations and youth groups, training clergy, pursuing charity work, sharing parenting tips and fighting for civil rights.

All content from Kiddle encyclopedia articles (including the article images and facts) can be freely used under Attribution-ShareAlike license, unless stated otherwise. Cite this article:
Wicca Facts for Kids. Kiddle Encyclopedia.