Fort William (Scottish Gaelic: An Gearasdan [ən ˈkʲɛrəs̪t̪ən] "The Garrison") is the second largest settlement in the Highlands of Scotland with around 10,000 inhabitants — and the largest town: only the city of Inverness is larger.

Fort William is a major tourist centre, with Glen Coe just to the south, Aonach Mòr to the east and Glenfinnan to the west, on the Road to the Isles. It is a centre for hillwalking and climbing due to its proximity to Ben Nevis and many other Munro mountains. It is also known for its nearby downhill mountain bike track. It is the start/end of both the West Highland Way (Milngavie-Fort William) and the Great Glen Way (a walk/cycle way Fort William-Inverness).

Questions over the town's English name are various. The post-Glorious Revolution fort was named Fort William after William of Orange, and the settlement that grew around it was called Maryburgh, after his wife. This settlement was later renamed Gordonsburgh, and then Duncansburgh before being renamed Fort William, this time after Prince William, Duke of Cumberland; known to some Scots as "Butcher Cumberland". Given these origins, there have been various suggestions over the years to rename the town (for example, to Invernevis). These proposals have led to nothing.

Questions over the town's Gaelic name are also quite interesting. The Gaelic name for the town is An Gearasdan; this is an adaptation of the French term garnison. French loanwords in the Gaelic language are very rare, and can only correspond with specific times in Scottish history: during David I's politically pacifying introduction of a Norman aristocracy in Scotland after the Norman conquest of England, and the period covering the Auld Alliance.

The most likely derivation for the town's Franco-Gaelic name is from the Scoto-Norman Clan Comyn, who built Inverlochy Castle in the Norman style that is familiar throughout Scotland during this period. French loanwords that took root during the Norman ascendancy in the British Isles and the Auld Alliance are far more common in the Scots language than in Gaelic.

Of course it is perfectly possible that there is a much simpler, possibly more likely explanation - the modern Gaelic name for Fort William, An Gearasdan is derived from the English garrison - which is itself derived from the French garnison - and entered common usage some time after the royal garrison was established during the reign of William of Orange or perhaps after the fort established during Oliver Cromwell's rule as Lord Protector.

Historically, this area of Lochaber was strongly Clan Cameron country, and there were a number of mainly Cameron settlements in the area (such as Blarmacfoldach). The nearby settlement of Inverlochy was the main settlement in the area before the building of the fort, and was also site of the Battle of Inverlochy. 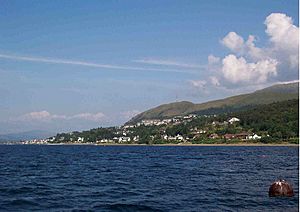 The town grew in size as a settlement when the fort was constructed to control the population after Oliver Cromwell's invasion during the Wars of the Three Kingdoms, and then to suppress the Jacobite uprisings of the 18th century.

In the Jacobite rising known as the Forty-Five, Fort William was besieged for two weeks by the Jacobites, from 20 March to 3 April 1746. However, although the Jacobites had captured both of the other forts in the chain of three Great Glen fortifications (Fort Augustus and the original Fort George) they failed to take Fort William.

During the Second World War, Fort William was the home of HMS St Christopher which was a training base for Royal Navy Coastal Forces.

More on the history of the town and the region can be found in the West Highland Museum on the High Street. 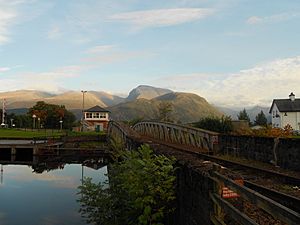 Fort William is the northern end of the West Highland Way, a long distance route which runs 95 miles (153 km) through the Scottish Highlands to Milngavie, on the outskirts of Glasgow, and the start/end point of the Great Glen Way, which runs between Fort William and Inverness.

On 2 June 2006, a fire destroyed McTavish's Restaurant in Fort William High Street along with the two shops which were part of the building. The restaurant had been open since the 1970s and prior to that the building had been Fraser's Cafe since the 1920s. Development work began in 2012 on new hotel accommodation and street-level shops and these opened in 2014.

A "Waterfront" development was proposed by the Council, but there was no overwhelming support for this in the town. The development would have included a hotel, some shops and some housing, but it was stated early in 2008 that it was unlikely to be completed before 2020. It was announced in April 2010 that the project had been abandoned.

Originally based on the still-extant village of Inverlochy, the town lies at the southern end of the Great Glen, Fort William lies near the head of Loch Linnhe, one of Scotland's longest sea lochs, beside the mouth of the rivers Nevis and Lochy. They join in the intertidal zone and briefly become one river before discharging to the sea. The town and its suburbs are surrounded by picturesque mountains. It is also on the shore of Loch Eil. It is close to Ben Nevis, the highest mountain in the British Isles, Glen Nevis and the town of Achnaphubuil, is on the opposite shore of the loch. When the railway opened to Fort William on 7 August 1894, the station was given prime position at the south end of the town. The consequence was that the town was separated from the lochside by railway tracks until the 1970s when the present by-pass was built, and the station was re-located to the north end.

The town is centred on the High Street, which was pedestrianised in the 1990s. Off this there are several squares. Monzie Square (named after the Cameron Campbells of Monzie, Perthshire, former landowners in the town), Station Square, where the long-since demolished railway station used to be, Gordon Square (named for the Gordons, who owned land where the town now stands in the late 18th century, when the town was named Gordonsburgh), and Cameron Square — formerly known as Town Hall Square. There is also Fraser Square which is not so square-like since it now opens out into Middle Street but it still houses the Imperial Hotel.

The main residential areas of the town are unseen from the High Street and from the A82 main road. Upper Achintore and the Plantation spread steeply uphill from above the high street. 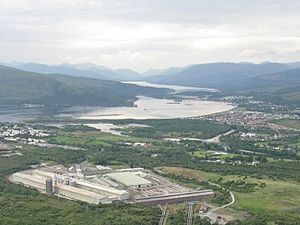 Inverlochy, Claggan, An-Aird, Lochyside, Caol, Banavie and Corpach outwith (ie outside) the town are the other main residential areas. These areas are built on much flatter land than the town.

Glenfinnan, 17 miles (27 km) away, is home of the Glenfinnan Monument (Jacobite era) and the famous Glenfinnan Viaduct (as seen on a Bank Of Scotland £10 note). The viaduct has become known to millions in recent years as the "Harry Potter Bridge" after it featured in the films of the books by J.K. Rowling, specifically Harry Potter and the Chamber of Secrets. Glenfinnan has also been used in Charlotte Gray and Highlander.

Just outside the town is a large aluminium plant operated by Alcan and powered by the Lochaber hydroelectric scheme, in its day the biggest tunnelling project in the world. This was formerly served by the Lochaber Narrow Gauge Railway better known locally as the Puggy Line.

Fort William has an oceanic climate (Cfb) with moderate, but generally cool, temperatures and abundant precipitation. 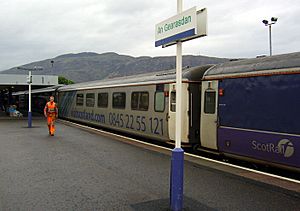 Arrival at Fort William of the overnight sleeper train from London Euston.

The West Highland Line passes through Fort William. Owing to the difficult terrain in the area, the line from Glasgow, to the south, enters from the northeast. Trains from Glasgow to Mallaig, the terminus of the line, have to reverse at Fort William railway station.

An overnight train, the Caledonian sleeper, has its terminus at Fort William. This service is known colloquially as 'The Deerstalker'.

The stands for local buses and express coaches are on MacFarlane Way adjacent to the railway station.

The Caledonian Canal connects the Scottish east coast at Inverness with the west coast at Corpach near Fort William.

Movies filmed in or near Fort William include Being Human, Braveheart, Highlander, Restless Natives, the Harry Potter series and Rob Roy. The TV series Rockface was filmed mainly around Fort William and some scenes of Monarch of the Glen were filmed around Lochaber although mostly near Newtonmore. Local Hero shot the internal Houston scenes in Fort William.

In a celebration of mountains and the culture that surrounds them, and in recognition of the importance of climbing and walking tourism to the town, the Fort William Mountain Festival is held there each year. For a number of years, this volunteer-led festival has concentrated mostly around film but, starting in the Year of Highland Culture - Highland 2007, its scope was widened, and it dropped the word 'film' from its title.

Highland Tribes music and cultural festival is held in Fort William in July of each year. The festival focuses on new and diverse Scottish music including many local acoustic acts and mainstream bands from all over the country.

The Fort William Convention, otherwise known as 'Fort Con' is an annual event on the town's calendar. Fort Con is a celebration of pop culture which includes comics, films, artists and authors. The first event in 2016 had a turnout of 1300 people and the event is set to grow year in year out. Previous guests who have appeared at the event include William Hope, Virginia Hey and John Altman. The next event is in August 2017 which moves the convention from a late Autumn date to a mid-Summer one.

All content from Kiddle encyclopedia articles (including the article images and facts) can be freely used under Attribution-ShareAlike license, unless stated otherwise. Cite this article:
Fort William, Highland Facts for Kids. Kiddle Encyclopedia.