Aonach Mòr is a mountain in the Scottish Highlands. It is located about 2 miles (3 kilometres) north east of Ben Nevis on the south side of Glen Spean, near the town of Fort William. The mountain has a summit elevation of 4,006 ft (1,221 m) and is a Munro.

The name Aonach Mòr (big ridge) might suggest that the mountain is taller than its close neighbour to the south, Aonach Beag (small ridge) to which it is linked by a high bealach. However, the names refer to the relative bulk of the mountains when seen from the glen, rather than their elevation; the summit of Aonach Mòr is 43 ft (13 m) lower than the summit of Aonach Beag.

The quickest and shortest ascent route for hikers is to take the gondola to the Snowgoose Terminal at an elevation of 2,133 ft (650 m) and then hike to the summit. More traditionally, the mountain is often climbed from the south from Glen Nevis and in conjunction with Aonach Beag.

The summit of Aonach Mòr has tundra climate (ET climate in the Köppen classification). The annual mean temperature is 1.6°C (35°F) and the warmest calendar month of the year, July, is below 10°C (50°F) so cannot support forests. Snow can usually be found on the mountain throughout the year and often persists from one winter till the next. Aonach Mòr holds one of Scotland's longest-lasting snow fields, located in Coire an Lochain at an elevation of 3,670 ft (1,120 m) (grid reference NN193736). During Cyclone Bodil, Aonach Mòr was hit by winds of 142 mph (229 km/h).

The Nevis Range alpine ski area is located on the mountain's northern and eastern slopes. The ski area was opened in 1989. A gondola lift and several chairlifts and ski tows provide access to 54 runs.

These include Scotland's highest pistes and best off piste backcountry skiing itineraries in the back corries of Coire Dubh, Coire an Lochan, Summit Coire and the West Face.

The ski area was originally eponymous, but later appropriated the name "Nevis" from the mountain's more famous neighbour Ben Nevis. The change sparked some controversy. Whilst Nevis is no doubt easier to pronounce than Aonach Mòr for non-Scottish Gaelic speakers, it was considered by some to represent an erasure of an indigenous name.

The gondola is also used by paragliders to reach launching points. 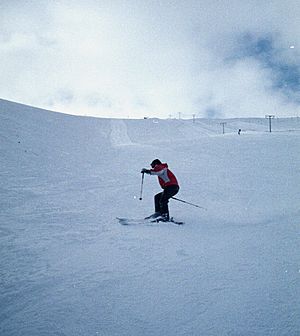 Allt an t-Sneachda or the Snow Goose. The main red run on Aonach Mòr in good snow conditions. 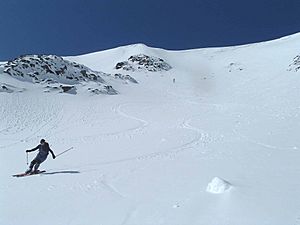 A skier on Summit Coire, one of many off piste runs on Aonach Mòr

All content from Kiddle encyclopedia articles (including the article images and facts) can be freely used under Attribution-ShareAlike license, unless stated otherwise. Cite this article:
Aonach Mòr Facts for Kids. Kiddle Encyclopedia.