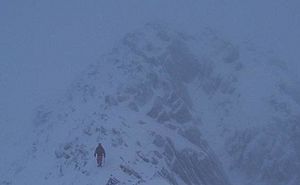 Deteriorating weather conditions on The Saddle in winter

Munro did not set any measure of relative height by which a peak qualified as a separate mountain, and much debate has since taken place over how distinct two hills must be if they are to be considered as two separate Munros.

Despite their modest height, walking and climbing in the Scottish mountains may be made dangerous by their latitude and exposure to Atlantic weather systems. Even in summer, conditions can be very bad; thick fog, strong winds, driving rain and freezing summit temperatures are not unusual. Winter ascents of certain Munros are widely accepted to provide among the most challenging ice climbs in Europe. Some walkers are unprepared for the often extreme weather conditions on the exposed tops and many fatalities are recorded every year, often resulting from slips on wet rock or ice.

All content from Kiddle encyclopedia articles (including the article images and facts) can be freely used under Attribution-ShareAlike license, unless stated otherwise. Cite this article:
Munro Facts for Kids. Kiddle Encyclopedia.