Buachaille Etive Mòr, generally known to climbers simply as The Buachaille, is a mountain at the head of Glen Etive in the Highlands of Scotland. Its pyramidal form, as seen from the A82 road when travelling towards Glen Coe, makes it one of the most recognisable mountains in Scotland, and one of the most depicted on postcards and calendars.

Buachaille Etive Mòr takes the form of a ridge nearly five miles (8 km) in length, almost entirely encircled by the River Etive and its tributaries. The ridge contains four principal tops: from north-east to south-west these are Stob Dearg (1021.4 m), Stob na Doire (1011 m), Stob Coire Altruim (941 m) and Stob na Bròige (956 m). Stob Dearg and Stob na Bròige are both Munros; the latter was promoted to Munro status by the Scottish Mountaineering Club in 1997.

Buachaille as seen from the north with all its main peaks visible. (See the image annotations on its Wikimedia Commons page.)

The steep, craggy north-eastern face of Stob Dearg forms the classic aspect of the mountain as seen from the Kings House Hotel, and constitutes the most direct route of ascent for climbers and scramblers. Crowberry Ridge, a classic rock climb graded severe, was first climbed direct – and photographed – in 1900 by the Abraham brothers with Messrs Puttrell and Baker. Immediately to the left is Curved Ridge, one of the most famous scrambling routes.

Alternatively there is a somewhat eroded path leading steeply up the Coire na Tulaich which, in summer conditions, allows walkers to ascend the peaks, reaching the ridge about half a kilometre west of Stob Dearg.

Buachaille Etive Mòr is separated from its sister mountain of Buachaille Etive Beag to the west by the valley of Lairig Gartain. To the east lies Glen Etive, which provides an alternative route of ascent, heading up steep grassy slopes to the summit of Stob na Bròige. Another route follows the Allt Coire Altruim from the Lairig Gartain, reaching the ridge about two thirds of the way along from the north. This route is often used as descent route in conjunction with an ascent via Coire na Tulaich, forming a circular route with a walk out along the Lairig Gartain.

On 24 January 2009, three mountain climbers were killed and one was seriously injured in an avalanche. 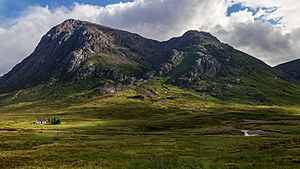 Buachaille Etive Mòr from the A82, showing Lagangarbh Hut in the lower left

The only building in the vicinity of Buachaille Etive Mòr is Lagangarbh Hut, popularly referred to as a cottage on account of its appearance. It sits at the foot of Buachaille Etive Mòr, adjacent to the River Coupall, and near the A82. It is owned by the National Trust, and managed by the Scottish Mountaineering Club, who make it available to hire as accommodation; up to 30 people can be accommodated.

The Buachaille has become synonymous with Landscape Photography in Scotland and is probably the most photographed mountain in the country. The most popular spot for this is the small waterfalls on the River Coupall to the east of the mountain. In recent years, the condition of the ground around these falls has deteriorated rapidly and many photographers now actively encourage staying away from the area to allow for regeneration. The site has also become popular for wedding photography with the mountain providing a dramatic backdrop.

All content from Kiddle encyclopedia articles (including the article images and facts) can be freely used under Attribution-ShareAlike license, unless stated otherwise. Cite this article:
Buachaille Etive Mòr Facts for Kids. Kiddle Encyclopedia.