Bidean nam Bian, lying to the south of Glen Coe, Highland, Scotland, is the highest point in the former county of Argyll. It is a complex mountain, with many ridges and subsidiary peaks, one of which, Stob Coire Sgreamhach, is classified as a separate Munro.

The most noticeable features of Bidean nam Bian are the famous Three Sisters of Glen Coe, three steeply-sided ridges that extend north into the Glen. Two of the sisters, Gearr Aonach (Short Ridge) and Aonach Dubh (Black Ridge) converge at Stob Coire nan Lochan, a 1,115 m (3,658 feet) subsidiary peak of Bidean nam Bian that lies about 1 km to the northeast of the actual summit. The final, most easterly sister, Beinn Fhada (Long Hill), joins the Bidean nam Bian massif at the summit of Stob Coire Sgreamhach.

Beinn Fhada is separated from Gearr Aonach by a glen known as Coire Gabhail. This can translate to Glen of Capture, however the glen is more normally known as the Hidden or Lost Valley, as it has a wide flat area concealed from Glen Coe by the landslip which blocked the entrance and allowed a loch to form. The valley was used by Clan Macdonald to hide their livestock from raiders, or hide cattle they themselves had stolen. The steep rough path up from Glen Coe skirts a wooded ravine, and is a popular short walk (around 4 kilometres (2.5 mi) in total), though it involves a river crossing and some rocky sections. 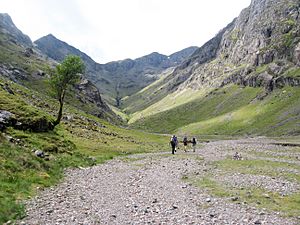 Coire Gabhail, the Lost Valley or Hidden Glen, leads up to the Bidean ridge: the peak of Stob Coire Sgreamhach is left of centre, with the slopes of Gearr Aonach to the right. 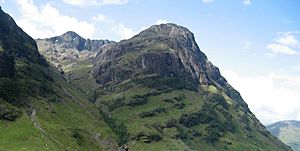 There are several routes up onto Bidean nam Bian. One may continue from Coire Gabhail (the hidden valley), reaching the main ridge by means of a zig-zag path that climbs up the flank of Gearr Aonach to cliffs at the head of the corrie, and a patch of scree at the bealach up to the ridge. From here, turn left to climb Stob Coire Sgreamhach which lies only about 0.5 km to the southeast, or right up along the cliff edge towards the summit of Bidean.

All of the above routes start from Glen Coe and go through the corries running between the Three Sisters, and may thus be combined to allow a traverse of the mountain. Due to the accessibility of Bidean from the north, routes on the southern side are used much less frequently.

On 19 January 2013 four people were killed in an avalanche close to Church Door Buttress on the north side of Bidean nam Bian. A fifth person was airlifted to hospital with serious injuries and a sixth escaped unharmed. It was the worst avalanche in Scottish history and the worst in the UK since the Lewes avalanche in 1836.

All content from Kiddle encyclopedia articles (including the article images and facts) can be freely used under Attribution-ShareAlike license, unless stated otherwise. Cite this article:
Bidean nam Bian Facts for Kids. Kiddle Encyclopedia.