Stob Coire Sgreamhach is a mountain in Scotland, forming part of the Bidean nam Bian massif on the southern side of Glen Coe. It is often considered a subsidiary peak of Bidean, though since the 1997 revision of Munros Tables it has been classified as a separate Munro.

The mountain is usually climbed in conjunction with Bidean nam Bian, thus allowing for a traverse of the range. One of the most common routes from Glen Coe is to ascend the head of Coire Gabhail (the Hidden Glen or Lost Valley) to reach the bealach between Stob Coire Sgreamhach and Bidean nam Bian. The wide floor of this corrie is hidden from view when seen from Glen Coe, and was used by the local Clan MacDonald to hide livestock, whether their own or stolen on raids.

Another route of ascent is via Beinn Fhada, the most easterly of the famous Three Sisters of Glen Coe. This route also starts from Coire Gabhail, but then ascends steeply up the ridge that marks the southeastern edge of the glen. Stob Coire Sgreamhach may also be climbed from Glen Etive to the southeast by way of a steep rocky ridge. 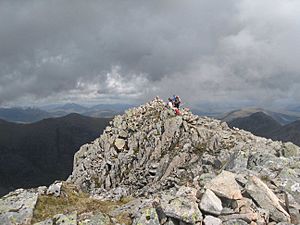 View east along the ridge to the summit of Stob Coire Sgreamhach.

All content from Kiddle encyclopedia articles (including the article images and facts) can be freely used under Attribution-ShareAlike license, unless stated otherwise. Cite this article:
Stob Coire Sgreamhach Facts for Kids. Kiddle Encyclopedia.