Buachaille Etive Beag (Scottish Gaelic: Buachaille Èite Beag), is a mountain located between Glen Coe and Glen Etive, on the edge of Rannoch Moor in the Scottish Highlands. Viewed from the south in Glen Etive it forms a twin with Buachaille Etive Mòr (the 'Great Herdsman of Etive'), from which it is separated by a bealach at a height of about 480 metres.

Buachaille Etive Beag forms a ridge about 3 km in length that runs in a southwest–northeast direction. It has two peaks of Munro status: Stob Dubh and Stob Coire Raineach. The latter became a Munro in the 1997 revision of Munro's Tables, in which all tops with a topographic prominence of more than 500 feet (152.4 m) were promoted to full Munro status.

The most common route on the mountain starts from the A82 at the head of Glen Coe. A cairn and a sign mark the existence of a right-of-way to Glen Etive, following the through the Lairig Eilde that separates Buachaille Etive Beag from Bidean nam Bian. This route is followed for around 1.5 km, at which point most hillwalkers simply head up the hillside to reach the bealach between the two summits, which is at a height of around 750 m. From here Stob Coire Raineach lies about 0.5 km to the northeast, whilst Stob Dubh is about 2 km to the southwest. After bagging both tops, most walkers simply descend by their route of ascent. One may also reach (and descend from) the bealach by means of the Lairig Gartain, which separates Buachaille Etive Beag, from its larger sibling, Buachaille Etive Mor.

An alternative route would be to start from Glen Etive, thus allowing for a traverse of the ridge. The southwest ridge is unrelentingly steep, and one would be obliged to arrange transport back to Glen Etive or walk an additional 4 km to return via the Lairig Eilde or Lairig Gartain. 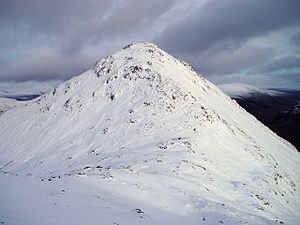 All content from Kiddle encyclopedia articles (including the article images and facts) can be freely used under Attribution-ShareAlike license, unless stated otherwise. Cite this article:
Buachaille Etive Beag Facts for Kids. Kiddle Encyclopedia.