The Kings House Hotel, with Creise marking the corner of Glen Etive in 2007.

The Kings House Hotel is an inn located at the eastern end of Glen Coe at the junction with Glen Etive in the Scottish Highlands. The inn, which is sited in an isolated position, about 2 km to the east of the head of the glen towards Rannoch Moor, and faces towards Buachaille Etive Mor, is a popular hostelry with rock climbers. It is called the King's House because it was used by the British Army during the subjugation of the Highlands following the aftermath of the Jacobite Rising of 1745.

In 2019 the hotel reopened after a substantial 1960s extension was demolished. Only the original 18th century structure was retained and incorporated into the new building.

The original Kings House, which is said to be one of Scotland's oldest licensed inns, was originally built in the 18th century. It was sited at the head of Glen Coe for travellers crossing Rannoch Moor. The strategic military road crossed the River Etive at this point by the inn. The military route, which was built by the British army in the aftermath of the 1745 Jacobite rising, then headed towards Glen Coe before ascending the Devil's Staircase to Kinlochleven. Parts of the former military route are now used as the West Highland Way.

By the late 18th century, travellers came from Ballachulish to Loch Lomond via Tyndrum. In 1803, the inn was visited by Dorothy Wordsworth, the sister of Romantic poet William Wordsworth, who wrote disparagingly:

Never did I see such a miserable, such wretched place, – long rooms with ranges of beds, no other furniture except benches, or perhaps one or two crazy chairs, the floors far dirtier than an ordinary house could be if it were never washed. With length of time the fire was kindled and after another hour of waiting, supper came, a shoulder of mutton so hard that it was impossible to chew the little flesh that might have been scraped off the bones.

Arriving at Kings House Inn I have a hearty welcome. Tea, my clothes and shoes dried. Next morning after a walk round I go in for breakfast. What shall I have? – grapefruit? What! can I have grapefruit in Kings House; of course I can; and so I have grapefruit, and porridge and cream, and fish, and everything just like a west end city hotel. I tell you I am well looked after and at a charge so moderate that I am almost ashamed of my appetite.

In 1910, the first visitors with motor vehicles began to come Glen Coe when the stone-shod road was upgraded with tarmac. 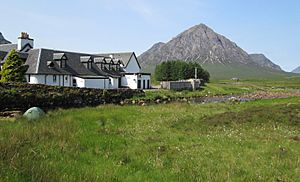 View from the West Highland Way, with wild camping beside the River Etive, looking past the climber's bar to Buachaille Etive Mòr.

In 1959, the Kings House Hotel underwent its first 20th century modernisation. The work was done in such a sensitive manner that the architect, John Thompson ARIBA of Weddell & Thompson, Glasgow, and unusually, also the builders (at the behest of the architect), Thos. Findlay and Sons Ltd of Mauchline, Ayrshire, both received Civic Trust Awards for their efforts.

The inn continues to offer food and drink. Before its recent refurbishment it had 22 bedrooms with facilities for fishermen, walkers and climbers. In winter, the hotel also caters to skiers from the "White Corries" ski resort just across the road on the mountain of Meall a' Bhuiridh.

Camping on uncultivated ground is generally permitted in Scotland under the Scottish Outdoor Access Code, and so it is common for people (especially hikers walking the West Highland Way) to camp in the vicinity of Kings House because the area is open moorland. However, campers must pitch on the opposite side of the river to the inn. 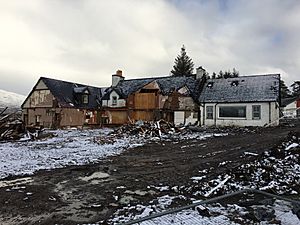 The Kings House Hotel during demolition of the 20th century additions.

The property was put up for sale in 2014, and was bought by the adjacent Black Corries Estate. A project team including hotelier Crieff Hydro prepared proposals, and in 2015 they announced a major refurbishment project, including removal of a 1960s extension and opening a hostel. A further planning application was made in 2017, and on 1 November the hotel closed for refurbishment. Demolition of the old extension commenced that month, and in January 2018 the new plans were given planning approval despite objections from the John Muir Trust. The new King's House Hotel, refurbished with 57 bedrooms, reopened in February 2019.

All content from Kiddle encyclopedia articles (including the article images and facts) can be freely used under Attribution-ShareAlike license, unless stated otherwise. Cite this article:
Kings House Hotel Facts for Kids. Kiddle Encyclopedia.