For the mathematical function known as a "Devil's staircase", see Singular function.

The Aonach Eagach is a rocky ridge lying to the north of Glen Coe in the Scottish Highlands, boasting two Munro summits. In length the full ridge continues for 10 km from the Pap of Glencoe at the west to the eastern end at the Devil's Staircase. The central section, some 2 km in length, is very rocky and the route along it requires scrambling ability. The slopes to each side are extremely dangerous, with steep grass and scree slopes hiding even steeper slopes which end in cliffs on both north and south sides of the ridge.

The Aonach Eagach is usually regarded as the most difficult horizontal 'scrambling' ridge in mainland Scotland, though it vies with Liathach (and, in winter, An Teallach) for this title. In his book "Scrambles in Lochaber", local climber Noel Williams warns that there are no other ridges in the area that are "so narrow and so difficult to escape from once committed. Some sections are extremely exposed. This makes it a difficult outing to grade, because the technical difficulties are not great". Williams settled on grade 2, implying it is easier than the (optional) grade 2/3 approach scramble up A'Chailleach, but added a further warning (in bold type) that "there are no safe descents on the south side of the ridge".

Traverse of the ridge

The Aonach Eagach is normally tackled from the Glen Coe (south) side in an east–west traverse. The best parking for this scrambling route is located just off the A82 at grid reference NN 17333 56746. From Allt-na-reigh near the head of Glen Coe a good path ascends Am Bodach (a subsidiary Munro top) and continues westwards along the ridge to the first Munro proper, Meall Dearg.

From here the summit of Sgorr nam Fiannaidh lies only two kilometres to the west, but a number of pinnacles must be scrambled over, and it is not uncommon for parties to take more than two hours to cross this short distance. There are a couple of sections where the use of a rope may prove prudent.

In winter, the ridge is a fine expedition, though considerably harder than in summer (Scottish Winter Grade I/II), and many parties will go roped for some sections. Because of the short winter days, benightment on the ridge or its approaches is also not infrequent.

Competent summer scramblers have plenty of time to reverse the ridge and descend Am Bodach, saving a walk back up the glen.

From Sgorr nam Fiannaidh, the most direct descent is to head south by southwest, down a steep zig-zag path leading by the side of Clachaig gully. This 'path' is exceptionally steep and extremely loose in places, and has many small rock steps; it approaches close to the main gully in several places and so is potentially dangerous (fatal accidents have occurred here). A gentler alternative is to continue along the ridge, until reaching the bealach between Sgorr nam Fiannaidh and the Pap of Glencoe. From here a track heads down the hillside, ending on the road just outside Glencoe village. It is also possible to retreat approximately 200m east from the summit of Sgorr nam Fiannaidh and descend directly down the scree slope to Loch Achtriochtan, taking care to avoid being drawn into gullies further down. This descent also requires care, particularly near the top, but is still far safer than the Clachaig Gully descent.

Alternatively, the two Munros may be climbed individually by simply descending by the route of ascent. However it is for the traverse that the Aonach Eagach is best known. 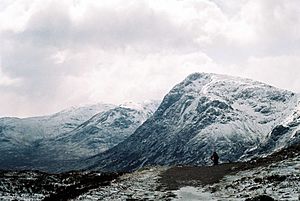 Looking south from the summit of the Devil's Staircase towards Buachaille Etive Mòr, with Creise and Meall a' Bhuiridh beyond

A path known as the Devil's Staircase crosses the range about 6 km east of Meall Dearg. Today, as part of the West Highland Way, it is used primarily by walkers and mountain bikers travelling between Kinlochleven and Glencoe.

The Devil's Staircase was given its name by the soldiers who were part of the road building programme of General Wade, because of the difficulties of carrying building materials up that stretch of the road. Later, however, the road lived up to its name when workers building the Blackwater Dam chose to travel to the Kings House Hotel after they had been paid, rather than walking down to Kinlochleven. The journey to the pub often proved to be more difficult than they realised and on the return trip, after a few drinks on a cold winter's night, the devil often “claimed his own.”

In 1692, the path was the approach route for the (apparently delayed) troops coming from Kinlochleven to provide reinforcements for the Massacre of Glencoe.

All content from Kiddle encyclopedia articles (including the article images and facts) can be freely used under Attribution-ShareAlike license, unless stated otherwise. Cite this article:
Aonach Eagach Facts for Kids. Kiddle Encyclopedia.