Ben Alder (Gaelic: Beinn Eallair) is the highest mountain in the remote area of the Scottish Highlands between Loch Ericht and Glen Spean. The vast summit plateau is home of one of Britain's highest bodies of standing water, Lochan a' Garbh Coire. It is the 25th highest Munro, and due to its remote location, one of the less frequently visited. Situated 19 km from Dalwhinnie and 15 km from Corrour railway station, it is commonly climbed in a two-day expedition, usually taking in its lower neighbour, Beinn Bheoil. There are two bothies near to the mountain: Culra Lodge (closed due to asbestos contamination) to the northeast and Ben Alder Cottage to the south, both potentially providing shelter for walkers in the area. Ben Alder Cottage is reputed to be haunted by the ghost of a ghillie who died in the cottage.

If a mountain bicycle is used on, or permission is obtained to drive on the track along the north west shore of Loch Ericht, Ben Alder is one of six Munros that a fit climber may be able to summit on a single late spring or early summer day. 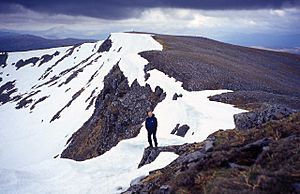 Ben Alder is one of the locations featured in the novel Kidnapped by Robert Louis Stevenson. The main characters David Balfour and Alan Breck Stewart are hosted by the Scottish clan chief Cluny Macpherson, fugitive after the Second Jacobite Rising, in one of his hiding places at Ben Alder.

The part about Cluny MacPherson is based on a true story. He really did hide out for an astonishing nine years on the slopes of Ben Alder, in a hiding place called 'the Cage', before escaping to France. Prince Charles Edward Stuart briefly joined him there in early September 1746 whilst on the run after the failure of the Forty-Five.

Ben Alder was the origin (meridian) of the 6 inch and 1:2500 Ordnance Survey maps of Inverness-shire.

All content from Kiddle encyclopedia articles (including the article images and facts) can be freely used under Attribution-ShareAlike license, unless stated otherwise. Cite this article:
Ben Alder Facts for Kids. Kiddle Encyclopedia.