Creise is a Scottish mountain that stands at the eastern end of Glen Coe, just to the south of the A82 road, some 26 kilometres South-southeast of Fort William in the Highland Council area. The mountain was previously known as Clach Leathad (Stony Slope) in the Munro Tables prior to 1981, its name being changed to Creise when the highest point was found to be 1200 metres further north along the summit ridge when using new mapping techniques.

Creise along with Meall a' Bhuiridh, Stob Ghabhar and Stob a' Choire Odhair is one of the four Black Mount Munros, it reaches a height of 1100 metres (3609 feet) and is a hill that is well known to skiers as well as walkers being situated next to the White Corries ski area from where it is often climbed along with adjoining Meall a' Bhuiridh. The two mountains are a popular traverse with cross-country skiers. The mountain is well seen from the A82 road and the Kings House Hotel, showing its steep and craggy northern buttress of Sròn na Creise. For many years the translated meaning of the mountains name from the Gaelic was unknown, however Irvine Butterfield now says that “creis” means grease or fat and refers to the rich grazing land around the hill which was used in the past by Glen Coe herdsman to fatten their cattle.

Creise is a long whaleback of a mountain, oriented north to south. It has a three kilometre long summit ridge with four distinct high points. The most southerly is Clach Leathad (Clachlet) which with a height of 1099 metres is just a metre lower than the main summit. Up to the 1970s it was regarded as the highest point of the mountain. It was downgraded to a “Munro Top” in the 1981 edition of Munro's Tables. 700 metres north of Clach Leathad along the ridge is Mam Coire Easain (1070 metres), a former “Munro Top” deleted from the tables in 1981. It is strategically important as it stands at the head of the ridge linking the mountain to Meall a' Bhuiridh. The main summit stands a further 650 metres north. It was previously an unnamed Munro Top on OS maps before being promoted to Munro in 1981.

A fourth high point is Stob a’ Ghlais Choire (996 metres). This Munro Top stands at the northern end of the ridge above the crags of Sròn na Creise which fall steeply to the valley of the River Etive. Sròn na Creise offers a challenging scrambler's route to the summit, but needs care in winter as several serious accidents have occurred on the crags. Rainfall on Creise finds its way to both coasts of Scotland. Drainage from the south of the mountain (Clach Leathad) flows into Coire Ba, one of the biggest corries in Scotland, and arrives at the east coast at the Firth of Tay via the Rivers Ba, Tummel and Tay. All other drainage from the mountain is via Glen Etive and Loch Etive to the west coast near Oban.

The northern cliffs of Creise tower behind the Kings House Hotel.

The most popular ascent of Creise along with the neighbouring Meall a' Bhuiridh starts at the White Corries ski Centre (grid reference NN266525) and climbs Meall a' Bhuiridh first by following the line of the ski chair lift (no self-respecting mountaineer would use the lift). The lifts and tows go right up to the summit of the mountain. The continuation to Creise goes SW and then west over a col with a height of 932 metres which connects the two mountains to reach the summit plateau of Creise. A direct ascent from the same starting point goes west across moorland to reach the foot of Sròn na Creise, it is then a scramblers route up to the northern end of the summit ridge. The hill can also be climbed as part of the Clachlet Traverse, a 25 km classic walk between the Inveroran Inn at Bridge of Orchy and the Kings House Inn in Glen Coe taking all four of the Black Mount Munros with 1700 metres of ascent. The view from the summit takes in a close up of the cliffs of Buachaille Etive Mòr and the western part of Rannoch Moor 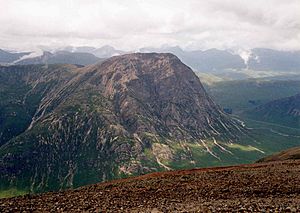 Buachaille Etive Mòr seen from the summit of Creise.

All content from Kiddle encyclopedia articles (including the article images and facts) can be freely used under Attribution-ShareAlike license, unless stated otherwise. Cite this article:
Creise Facts for Kids. Kiddle Encyclopedia.