Firth of Tay facts for kids

Kids Encyclopedia Facts
For the landform in Antarctica, see Firth of Tay (Antarctica). 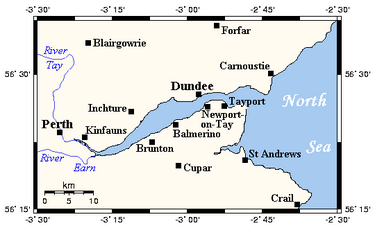 A map of the Firth of Tay and environs

The Firth of Tay ( Scottish Gaelic: Linne Tatha) is a firth on the east coast of Scotland, into which the River Tay (Scotland's largest river in terms of flow) empties. The firth is surrounded by four council areas: Fife, Perth and Kinross, City of Dundee, and Angus. Its maximum width (at Invergowrie) is 3 mi (4.8 km).

The marshy Mugdrum Island is the only major island in the firth.

The Firth of Tay in Antarctica was discovered in 1892–93 by Captain Thomas Robertson of the Dundee whaling expedition and named by him after the one in Scotland. He also named nearby Dundee Island in honour of the main city on the firth.

The Firth of Tay and the Eden Estuary (which lies 8 miles to the south of the firth) were designated as Special Protection Areas on 2 February 2000, as Ramsar wetlands a few months later (on 28 July 2000), and as Special Areas of Conservation five years later (on 17 March 2005). Several parts of the firth are within a site of special scientific interest – Inner Tay Estuary, Monifieth Bay, Tayport-Tentsmuir Coast. The Invergowrie Bay section of the firth is a local nature reserve.

The Firth of Tay is noted for its extensive sand and mudflats, its population of common seals, and its wintering birds (such as oystercatcher, bar-tailed godwit, shelduck and velvet scoter). There is good access to much of the shoreline, and the firth offers many good wildlife-watching opportunities.

The reedbed on the north shore of the inner estuary in the firth is about 15 km long; it is thought to be the most extensive reedbed in Britain.

Towns and villages along the coast

All content from Kiddle encyclopedia articles (including the article images and facts) can be freely used under Attribution-ShareAlike license, unless stated otherwise. Cite this article:
Firth of Tay Facts for Kids. Kiddle Encyclopedia.