Broughty Castle is a historic castle on the banks of the river Tay in Broughty Ferry, Dundee, Scotland. It was completed around 1495, although the site was earlier fortified in 1454 when George Douglas, 4th Earl of Angus received permission to build on the site. His son Archibald Douglas, 5th Earl of Angus was coerced into ceding the castle to the crown. The main tower house forming the centre of the castle with four floors was built by Andrew, 2nd Lord Gray who was granted the castle in 1490. 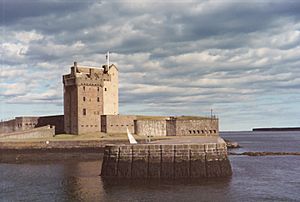 Broughty and the bank of river Tay

The castle saw military action during the 16th-century War of the Rough Wooing. After the battle of Pinkie in September 1547 it was surrendered by purchase to the English by its owner, Lord Gray of Foulis. A messenger from the castle, Rinyon (Ninian) Cockburn, who spoke to the English supreme commander the Duke of Somerset before the castle was rendered was given a £4 reward. The Scottish keeper, Henry Durham, was rewarded with an English pension, income from the fishing, and an import/export licence. Durham later lent the English commander £138. William Patten, the English writer who accompanied Somerset, noted the castle's strategic importance;

"it standeth in such sort at the mouth of the river Tay, that being gotten, both Dundee and St. John's Town (Perth), and many other towns else shall become subject to this hold or be compelled to forgo their use of the river."

The position of the old castle itself was advantageous to modern warfare, as it was discovered that the swift river current made naval bombardment impractical. Soon after taking possession, the English garrison further fortified Broughty by building a ditch across the landward side of the castle's promontory. Edward Clinton began the refortification, with the advice of an Italian engineer, Master John Rossetti, and left 100 men guarded by three ships. William Bruce of Earlshall feared the English would build an outpost on the south say of the Tay. The garrison was first led by Sir Andrew Dudley, the Duke of Northumberland's brother, who hoped to distribute Tyndale's Bible in Dundee. Andrew Dudley wrote in October 1547 that; "never had a man had so weak a company of soldiers given to drinking, eating and slothfulness," although, "the house stands well." His garrison included Italian and Spanish soldiers, and he hoped that Grey of Wilton would send him an expert French surgeon. The town of Dundee agreed to support the garrison and resist the Governor of Scotland, Regent Arran on 27 October 1547. The Constable of Dundee, John Scrimgeour, and the baillies and council signed the agreement, although under the duress of Dudley's two gunships.

The Earl of Argyll tried to capture the castle on 22 November 1547 and again in January 1548 with 150 men led by the soldier Duncan Dundas, without success. Thomas Wyndham brought two more ships in December 1547 and burnt Balmerino Abbey on Christmas Day. On 12 January 1548, one hundred matchlock guns were delivered from Berwick, with powder flasks, matches, touch-boxes, and bullet moulds. Sir Thomas Palmer and the Italian military engineer "Master John", Giovanni di Rossetti,who was made master of ordnance at Broughty, made plans to improve the fortifications, noting that the castle was overlooked by a nearby hill. In February 1548 100 workmen were sent from Berwick and new armaments including falcon guns, cannon-balls for demi-culverins, bows, bills, pikes, cresset lights, cables and anchors. Palmer set to work fortifying the hill in February and also considered ambitious plans to build a citadel in Dundee with the demolition of the church and tolbooth. Andrew Dudley waited for lead to make a new platform (probably for artillery) on the castle tower in March 1548.

Andrew Dudley was succeeded by John Luttrell who had been the commander at Inchcolm. On 11 May 1548, the English commander at Haddington, Grey of Wilton wrote to Luttrell that he could not expect more supplies because of the expected French fleet. Grey of Wilton warned him against Scottish assassins in June, and Somerset required him to dismiss the German mercenaries in his command. There was some relief for Luttrell, as Lord Methven took away the guns of the Scottish counter-battery for redeployment at the Siege of Haddington on 6 June 1548.

Meanwhile, Luttrell had been ordered to build a new fortification on an adjacent site. In November he wrote to Somerset describing the progress of this work explaining that the ramparts made from turf were unstable and could not be strengthened. Luttrell said his enemies would not need guns; "for theye shall fynde hytt fallen downe redy to ther handys." In December 1548, Patrick, Lord Gray of Foulis, was summoned to account for his treasons against the Government of Scotland, and although the French commanders argued for his execution, he was eventually pardoned at Regent Arran's command.

Thomas Wyndham and his nephew Luttrell's activities on the Forth were called into question in November 1549, and the Earl of Rutland was required to investigate whether one of the ships they had seized was a lawful prize. On Christmas Day 1549, Mary of Guise held a conference at Stirling Castle with her guests, and they agreed that more French guns could be brought to besiege Broughty. Twelve English ships arrived to support the defenders and it was 12 February 1550 before the French and Scots managed to recapture Broughty. Mary of Guise watched the successful assault on Wednesday 6 February 1550 from a vantage point across the Tay. Paul de Thermes led the French troops, 240 were injured and 50 killed. The garrison surrendered six days later at midnight. James Dog of Dunrobin claimed Luttrell as his prisoner and his papers were captured. His ransom of £1000 Scots was raised on 16 May 1550 as an exchange for the sons of George Douglas of Pittendreich and the Master of Semple who were prisoners in England. (George Douglas's son would later rule Scotland as Regent Morton.) Luttrell was promptly re-arrested for debts to a Dundee merchant, Robert Craig, but Regent Arran paid the merchant in September, and Luttrell was allowed home.

War of the Three Kingdoms

The castle was attacked again, in 1651, by General Monck and his Parliamentary army during the Wars of the Three Kingdoms. On this occasion the Royalist defenders fled without a fight. After 1666, when the Gray family sold the castle, it gradually became more ruinous.

Military and modern use

In 1846 the castle was bought by the Edinburgh and Northern Railway Company in order to build an adjacent harbour for their railway ferry. In 1855 the castle was acquired by the War Office with the intention of using it to defend the harbour from the Russians. In 1860 renewed fears of a French invasion led the War Office to rebuild and fortify the site. The site was rebuilt according to the designs of Robert Rowand Anderson. The walls of the main courtyard were rebuilt and new wing and courtyard were added to the tower. A caponier was added along the south-east side of the courtyard. Emplacements for nine large guns were also constructed. A small enclosure on the west side of the courtyard was also built. During the First World War the castle battery mounted two 4.7-inch Quick Firing guns.

Broughty and the bank of river Tay 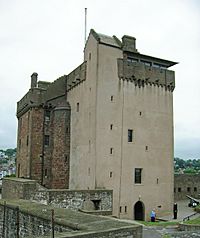 From 1886 to 1887 a range was built to house submarine miners to the east of the castle. In an emergency these would lay mines in the Tay Estuary to damage enemy shipping. In 1889–1891 a magazine was built within the western enclosure which also led to a major remodeling of the gun emplacements. The castle remained in military use until 1932, and again between 1939 and 1949. The last defence-related alteration was made in the Second World War when a defence post was built within the top of the main tower.

In 1969 the castle opened as a museum operated by Dundee city council. It is designated a scheduled ancient monument.

All content from Kiddle encyclopedia articles (including the article images and facts) can be freely used under Attribution-ShareAlike license, unless stated otherwise. Cite this article:
Broughty Castle Facts for Kids. Kiddle Encyclopedia.