Balmerino Abbey, or St Edward's Abbey, in Balmerino, Fife, Scotland, was a Cistercian monastic community which has been ruinous since the 16th century. 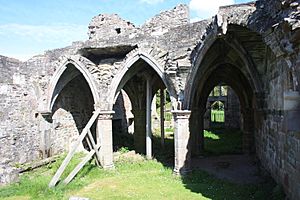 The cloisters of Balmerino Abbey

It was founded in 1227 to 1229 by monks from Melrose Abbey with the patronage of Ermengarde de Beaumont and King Alexander II of Scotland. It remained a daughter house of Melrose. It had approximately 20 monks at the beginning of the sixteenth century, but declined in that century. In December 1547 it was burned by an English force, and allegedly damaged again in 1559 by Scottish Protestants as part of the Reformation's destruction of idolatrous structures.

In combination with several centuries of plundering for building stone the entire main abbey is absent and only the smaller support structures to the north survive, most notable of which are the fan-vaulted cloisters.

In 1606\07 its name was reuseded as a secular lordship for James Elphinstone, 1st Lord Balmerino. 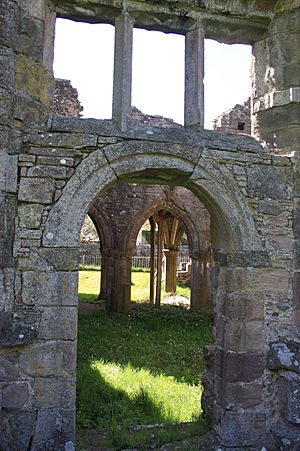 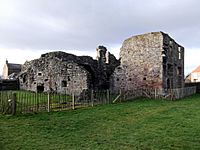 Balmerino Abbey as seen in 2012

In 1910 the landowner employed Francis William Deas to survey the building and execute a programme of repairs and consolidation.

The abbey is now under the stewardship of the National Trust for Scotland, and a small entrance fee is requested at an honesty box, with no ticket booth or manned presence on-site. The ruin consists of a substantial section of the east wall of the main church. More substantial ruins of some of the associated buildings exist to the side of this but access is currently prohibited due to their poor state of repair.

As of summer 2007, a sign on site states that entrance fees will be used to contribute towards a possible future stabilisation of these ruins in order to improve safety for visitors to enter once again.

The ruins are designated a scheduled monument.

All content from Kiddle encyclopedia articles (including the article images and facts) can be freely used under Attribution-ShareAlike license, unless stated otherwise. Cite this article:
Balmerino Abbey Facts for Kids. Kiddle Encyclopedia.